March 25th was Don's birthday and his gift was surgery! His previously scheduled appointment was purposefully chosen for this day and it was indeed a gift. Don has had a fatty tumor called a lipoma on his neck for over 15 years and it had grown to, as his surgeon said, an impressive size! Imagine having a growth on the back of ones neck for that length of time and it finally reaching baseball-size! There are some interesting pictures on google of lipomas (which I decided did not need to be included in this post!).
Everything went fine thanks to the Oakleaf Surgical Hospital. (One stop shopping for all your elective surgical needs!) We'll never forget what day he had it removed, and he's recovering nicely. The six inch incision is steristripped until tomorrow when it can be unveiled.
His talented surgeon, Dr. Steven Immerman, is also an accomplished glass artist in the area of kiln-formed glass. You can see his amazing work at his website at clearwaterglass.com
Posted by sherri at 12:46 PM No comments:

Email ThisBlogThis!Share to TwitterShare to FacebookShare to Pinterest
Labels: lipoma

The air, I mean. It's alive with birds at Catfish Corner! High above are migrating Tundra Swans and Canada geese. We have had some Trumpeter Swans overhead, too! Sandhill cranes are doing their odd cackle honk and are camped out somewhere down the slough.
Of the smaller variety, are lots of mallards, wood ducks, and a personal favorite, the Hooded Mergansers. They are performing their mating dances and skipping across the water like little bugs.
The blackbirds have returned, and we have had sightings of bluebirds and wrens. The robins have been here most of the winter but their songs are now about LOVE!
Posted by sherri at 7:11 AM No comments:

Email ThisBlogThis!Share to TwitterShare to FacebookShare to Pinterest
Labels: birds

I had the initial jury visit from the Art Tour committee and have received word that I will be accepted as a hosting site for the FRESH ART Fall Tour 2009!
Mark the calendar for the weekend of October 2, 3 and 4. The fall colors will be in bloom and there will be 15 or site artist sites open for visitors in all types of artistic mediums from glass (me!) to pottery, paintings and fine art, wood, metal and jewelry.
I'm happy to be part of this tour and thankfully I have many months to PREPARE!
Posted by sherri at 12:58 PM 1 comment: 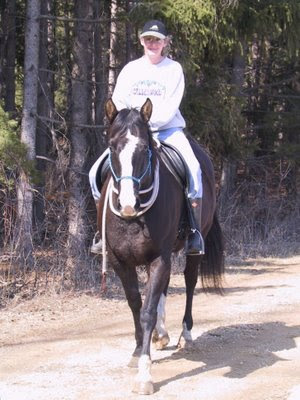 and a horse....it's a beautiful thing. The HORSE I mean!
Fran came over and got us up and riding after she took a few kinks out.
It's SO NICE OUT!!
Posted by sherri at 2:10 PM 1 comment:

What Were The Chances? 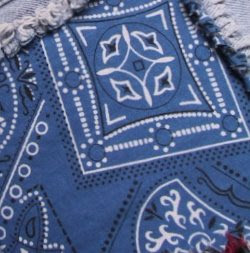 The recent trip to Eau Claire resulted in NO blue bandana fabric. I bought all that was available at Mill End when I originally picked out fabric for my rag quilt and there was none to be had when I went back.
Ditto for the lovely new JoAnn Fabric in EC, a only a glaringly different pattern was available at Hancock Fabric--a possibility if I can't find a match.
So what else could I do? Well--what I should have done in the first place. CHECK EBAY!
A quick search of "blue bandana fabric" resulted in about a dozen selections and MIRACLE! there was an exact match--and all they had left were two yards. So I took both and they were shipped quickly from Chandler, AZ! The project continues--
Posted by sherri at 6:46 AM No comments:

Email ThisBlogThis!Share to TwitterShare to FacebookShare to Pinterest
Labels: sewing 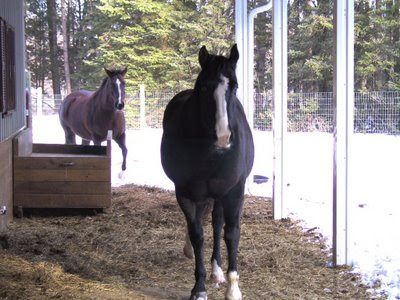 I had a good week in the shop--got Loie's dreaded lamp repairs done that have been sitting on the shelf for about four years. Next in line is one of my own lamps that had a run in with disaster. I'm happy to get these old projects out of the way.
My little shop-kitty Paisley, was SO helpful. Now that he's feeling better he acting like the little character that he is. He is just starved for affection so there are lots of pets involved. He is getting so playful I had to let him out into the barn while I was reassembling the lamp parts. I can only handle so much "help"! I brought some cat toys from the house to help him release some of the kitten energy.
It was closer to 50 yesterday and sun, sun, sunny! I walked through the icy woods to get to the greenhouse for a heat fix. It was 86 degrees out there! Gets the heart pumping for spring planting. I might have to throw some lettuce seeds out there and see what happens.  Helga and I made our way back and it got the halter and 22' line out and had a little pony time.
The girls are dirty, lazy and sassy all at the same time. Cerra was the well behaved one this time which is unusual. After some brushing--hair flying everywhere--I had Cheyenne on line first and she tore around me, snorting and kicking. Gee, this is fun! I was careful not to let her get too close while she's being unpredictable. Suddenly, while tearing in a circle, she put her head down and tried rubbing her front legs WHILE SHE'S RUNNING! Now this is interesting. She then stopped dead and rubbed for the longest time--took off--and then did the same thing. Over and over. I don't know if her head was itchy or if her legs were, but she just kept it up to the point she got her front leg over the line and that felt funny, so she didn't want to stop when I asked her to come in.  That led to her scaring herself as she tore out of the circle and headed back to the barn with long line in tow through the muddiest part of the pasture! So much for my clean rope.
Cerra--good girl that she is--went over to her and told her not to be scared and they turned and both walked back up to me! That called for a treat. Cerra's turn thankfully was pretty uneventful. Everyone popped a sweat after about ten minutes as an indication of the level of unfitness! Will try again tomorrow and in these subsequent lovely days coming up.
Posted by sherri at 6:57 AM No comments: 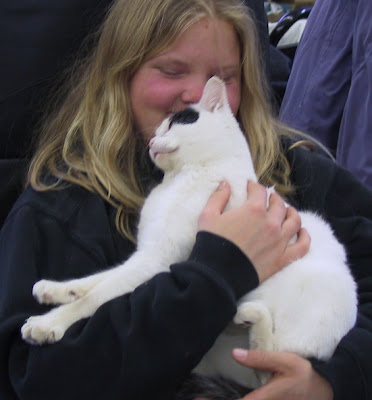 Fran got home from Florida earlier today and came out for a visit. The moment she opened the shop door, Mr. Kitt E. Katt jumped off the table and ran to the door to greet her! I guess that means he is an extrovert and he proceeded to take over her lap--purring and chirping all the way!
However, HE STILL NEEDS A REAL HOME! Living in the shop has it's advantages--like pretty girls coming to visit--but with a personality like his, I think he would fit into a home pretty readily. Helga comes in to visit and he launches at her with his friendliness. Helga doesn't quite know what to do about this cat creature who adores her. None of the inside cats are this nice to her!
I've been asking him what he would like to be called, and he's just so happy to be indoors all he wants is to not be called late for dinner. But yesterday I just thought about his marking as looking like paisley. PAISLEY! Hey, Paisley! He still doesn't care what his name is! Would you like to name him?!
Posted by sherri at 7:51 PM 2 comments: 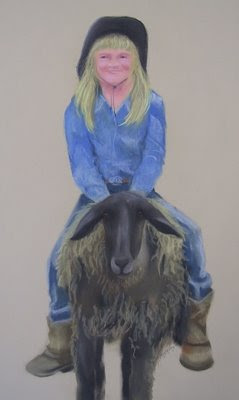 I got word this evening that my client got her artwork delivered today and that I could pass these along.
The pieces measured approximately the 16 x 20 size--some taller some wider. I used soft pastel for two and a combination of pastel/colored pencil/watercolor  on one, but basically, they are all similar in medium. 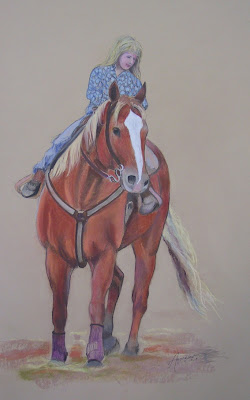 The challenge for me was in getting a realistic face into such a tiny area, so I settled for a representation rather than perfection in that particular detail.
The lovely Horne girls are talented equestriennes and I hope these pieces of art will serve in the future to remind them of their young days with their wonderful horses who taught them so much.
Posted by sherri at 8:35 PM No comments:

I haven't named "the guy" yet--but these were two suggestions from the vet's office. We did make a trip to Wabasha on Thursday. Barb, the vet, and Lisa, vet tech, thought he was perfectly darling and commented on his comma shaped marking on his head and his black tail as being "very unique". He had the full meal deal of shots, earmite treatment, eye salve for a viral eye infection, and an antibiotic shot for his "systemic infection". He was a good boy riding in the carrier in the car--no arms shooting through trying to escape or bloody nose like the first time. His next trip will be on Monday for the little snip-snip. He'll hate me after that one. I had better stock up on catnip.
Posted by sherri at 10:54 AM No comments:

Email ThisBlogThis!Share to TwitterShare to FacebookShare to Pinterest
Labels: cats 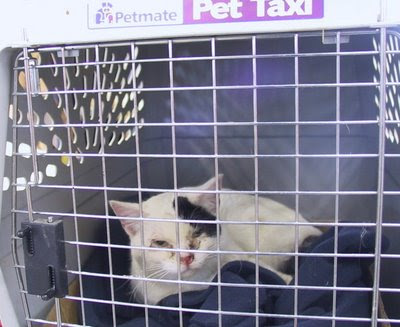 He looks sad and vulnerable here but is actually doing much better now! His day started with a tasty breakfast and a huge hugging and purr session. He's a boy! This was my opportunity to move on to putting this little guy in my large carrier. He proceeded to have a panic attack once he realized he was confined. The experience probably brought back some horrifying memories of being captive before he was tossed out. He threw himself around in the box and gave himself a bloody nose before he finally calmed down. I cooed all the cozy kitty words that he needed to hear and a little while later the door could open and pets and purring followed. His ravenous appetite was satiated with all the Friskies canned cat food he wants. I worked in the shop today and even with the tv and grinder running he slept like death. I would like to handle him a little more, clean up his face and check for fleas, ear mites, etc., before I make the vet trip. He's been through a lot and at this point food and rest will help him more than a scary trip to the vet. The first test at the vet is key. It is for Feline Leukemia and if he tests positive for it it will mean the end of his short life. But, if he passes that one, he can be neutered and have a very happy life at his forever home. Which brings me to....
You know I won't be able to keep him since I already have four cats in the house, so help me find a nice home for this little sweetie--you aren't going to believe how good he is going to look in a month! A fur-covered little bundle of love.
Posted by sherri at 5:00 PM 1 comment: