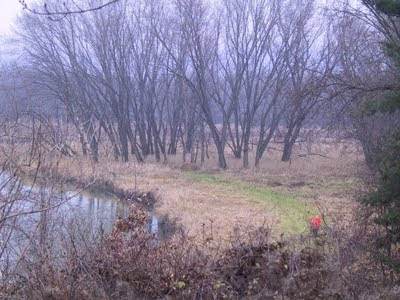 Mr. Anderson donned his blaze orange and headed down to Catfish Corner in pursuit of the Mr. Mossback last Sunday morning.
We have seen several deer in "the grove" and had the treat to see a doe with her youngster in tow sniffing a scrape. It was just a minute or two when the little one ran off in a big hurry. Mother continued sniffing.
Enter a HUGE buck to meet the missus and he was impressive! Don and I were in the house watching this scene unfold. We were both in awe and so intently following the ritual that when they trotted off (presumably to consummate their brief love affair) we were both wondering why we didn't grab the camera -- or -- oh, yeah, -- I guess Don could have found his rifle. (If he were at all interested in THAT part of the hunt!)
We are pretty sure this doe and fawn are the same ones who have been up by the barn eating the pumpkins and leftover chicken grains. Such a tiny fawn and mom isn't much bigger.
A couple days have passed and this evening we saw a group of four does in the grove with the little fawn in tow. Those four crossed the creek but for some reason the little one went off in the opposite direction.
I hope you find your mummy, little one.
Posted by sherri at 4:41 PM No comments: 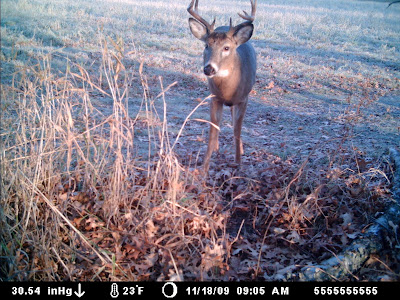 As in, take care, dear. The 9-day deer gun season begins on Saturday and this guy will have a target on him. He has lots of space to hide at our place. I don't know if Don will hunt or not. He usually takes a gun out for a walk, if that qualifies. As he puts it, "I've done enough hunting in my time." The moss backs seem to get this way over time, while some never seem to outgrow the need to kill something.
I was raised in a home where deer season was a family event and a successful hunt would feed our family for the year. These days more hunters just go for the killing part, the pictures and the party, and get rid of the deer by "giving" it to anyone who will take it. The phone calls will start coming with hunters trying to get rid of deer who mistakenly think they are doing us a big favor. Don steadfastly refuses these offers which means taking responsibility for their problem. Few seem to want the task of actually taking care of the meat and using it with the gratitude it should certainly deserve.
I'm not an anti-hunting, tree-hugging liberal. (Actually I do hug trees.) I just feel empathy for the creatures and how vastly different the whole enterprise is now. To the state it's all about money and selling licenses, to unscrupulous hunters it's a greed fest, to the non-hunters out there going through the motions of carrying a lethal weapon it is an accident waiting to happen. It's not just deer who will die in the next nine days.
Bless those who can participate with sportsmanship.
Posted by sherri at 8:07 AM No comments: 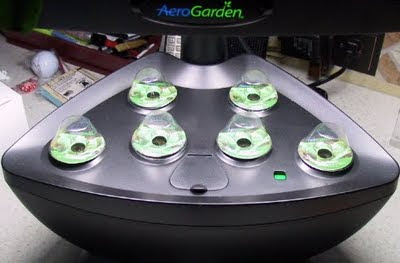 I won this cool tabletop AeroGarden at the Refuge Farms silent auction last Saturday. I had my eye on one of these for a long time, but couldn't justify the $150 price tag just to grow some lettuce. I guess it was meant to be that this one was donated to the cause and I got to take it home for significantly less.
I planted it yesterday with varieties of romaine lettuce and because the plants grow hydroponically I should be harvesting leaves in three weeks! That should be at about the time the greenhouse will freeze up for good and end my outdoor gardening season.
Posted by sherri at 3:47 PM No comments:

Email ThisBlogThis!Share to TwitterShare to FacebookShare to Pinterest
Labels: aerogarden 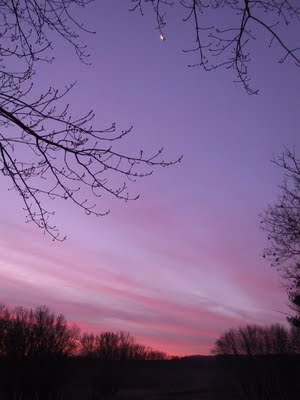 This is normally the kind of shot I put up for the winter but it arrived this morning and it was here for just a minute or two.
The little white blip at the top is actually the moon, but so tiny it looks like a star.
The lavender pink sky turned to gray in a blink--embarrassed at being photographed so early in the morning.
Posted by sherri at 7:28 PM No comments: 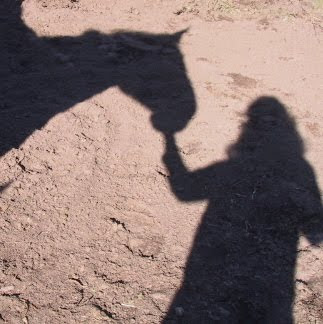 I spent some time Saturday morning out with the ponies before I left for the Refuge Farm Gala. The sun was bright--too bright for good photos -- but turned out great for shadows.
I picked up my friend Katie in Hager City and we headed to the U of M Equine Center for an evening with the supporters of Sandy Gilbert and the Refuge Farms. Uniquely, the event was in the arena! Half held horses and half beautifully decorated in true Gala style. Sandy brought five of The Herd and told their stories with such passion. The rapt audience viewed a touching video of the story of "Laddee the Little Belgian Mare" who was one of the horses in attendance. Later, Don Hoglund, DVD, spoke about his work rescuing horses from the White Sands Missile Range in New Mexico. A silent auction held a wide variety of items that were donated to the cause and it was hard to decide what to bid on there were so many wonderful offerings. (Note to self: next year bring more money!) We had a wonderful catered dinner and ended the evening with a live auction of generously donated works of art and goods from sports memorabilia to gorgeous quilts.
It was a late night for this old girl by the time I got home, but the staff of volunteers worked into the night to take down the show and head home with some horses and will be heading back to St. Paul for the last of the horses today.
I could go on, but suffice it to say it was a wonderfully well organized and attended event. It was apparent that this was a "family reunion" celebration for the volunteers and supporters and included many of the vets who have cared for the refuge herd through various operations and procedures. Hugs galore at this love fest!
Posted by sherri at 10:51 AM No comments:

A Glimpse of Lake Pepin 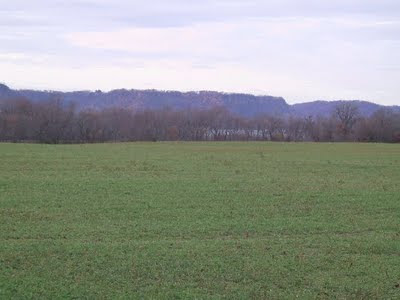 Now that the leaves have nearly all fallen we can catch a little glimpse of Lake Pepin from our alfalfa field. The hills in the distance are on the Minnesota side of the creek and it's a pretty view any day of the week.

The new seeding has gotten a good start and has come in thick with the timely rains. A nice blanket of snow would be nice to protect it from winter--but that can wait for awhile!
Posted by sherri at 4:16 PM No comments:

Pretty Colors of Fall Are Leaving 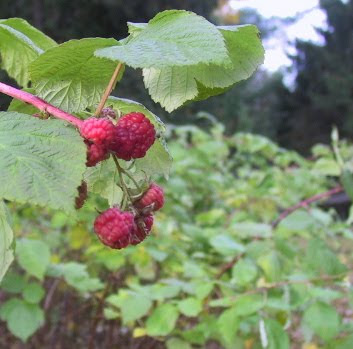 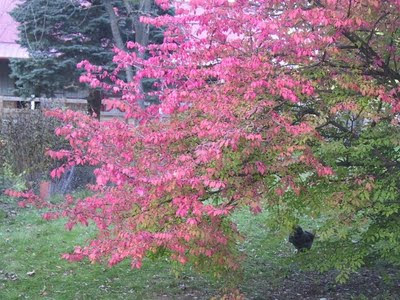 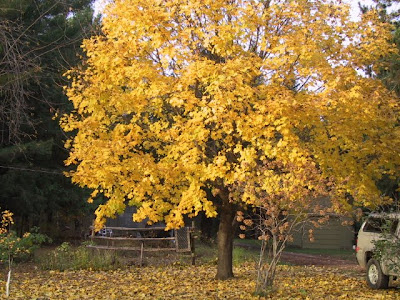 As you can see from the title photo, the colors of fall have left us. I got a couple shots before the leaves blew off in our brisk winds.
A couple lonely fall raspberries are trying to ripen in these last cool days. Other branches of green ones have little chance to mature.
Our gigantic hard maple tree is still holding on to its palm sized leaves.
Posted by sherri at 3:00 PM No comments: