Our winter is just continuing to hang....which has been good for putting in studio time. I'm continuing to add to the fall theme by making use of the many reference photos I took.

The Minnesota bluffs in the background and the foreground is the Wisconsin side as viewed from our alfalfa field. I love the early fall colors when there is still some green to offset the gold and reds as they emerge.

As much as I love fall, I have also been working on some winter landscapes which will be coming up later! Someday it really will be spring and then the real outdoor work will begin around here.

The L.E. Phillips Public Library has provided the list of participants in the annual juried show. I didn't win a prize with my "Portrait of Helga" but I do feel honored for having made it through the jurying process. The variety of art included paintings, pottery, sculpture and multi-media works. Something for everyone. 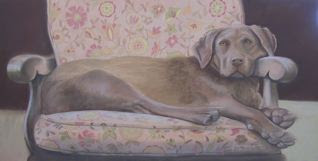 I haven't entered an art show since high school so it was a good experience to go through the process and learn the ropes. I'll try again next year!

Posted by sherri at 2:01 PM No comments: 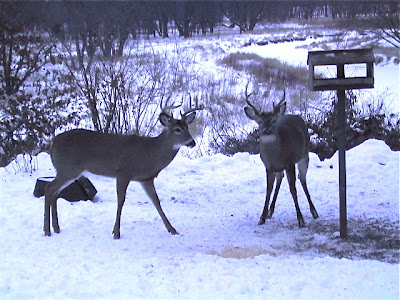 We had these two characters we named Ollie and Stanley appear in 2008. Toward spring they started coming up in the evening to raid the bird feeder. It's really fun to watch them so close and I took lots of pictures through the windows as they made their way through the yard. 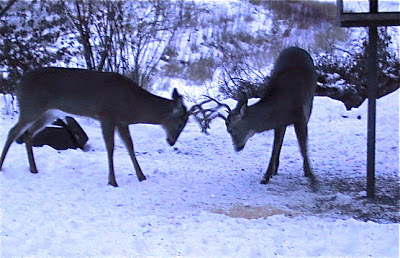 They even had their boyish tussles! Which is probably why Stanley ended up with a gouged right eye. The next year only one came back.....our one-eyed Stanley. 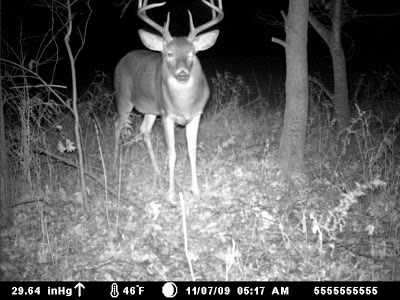 He passed by the trail cam a few times. Always distinctive because only one eye reflects. It was amazing to see he could fight off the infection and that it healed as well as it did. 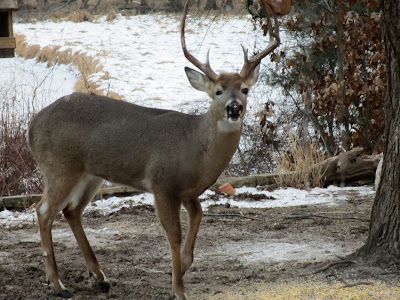 This photo was taken last month. We are figuring he is about 6 years old now. His antlers are getting bigger every year, but now he has a bad left front leg! He's hobbling around on it, but he's none too quick and the hoof appears to be very overgrown since he isn't wearing it down. 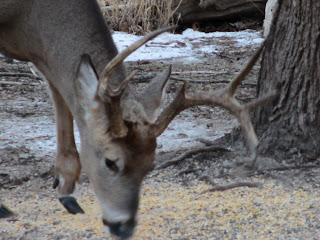 His right antler is ragged and broken off, too. He's been fighting. Notice the bulging ankle. Poor Stanley. 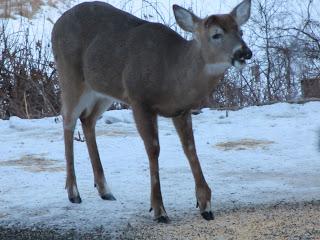 As of last week he has reappeared sans antlers. He has also been letting the wife and kids come up and eat after he gets his fill. Sweetie that he is. Keep well, Stanley! Hope you can recuperate and be with us for another year. You are always safe from hunting as long as you stay at Catfish Corner.

And, yes. I am going looking for those antlers!
Posted by sherri at 12:56 PM No comments: