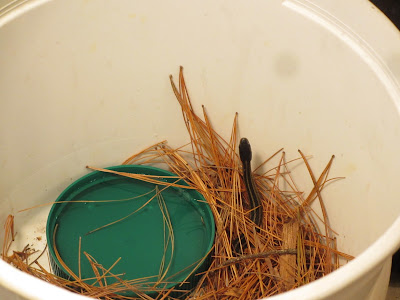 I made the way to the basement as I do many times a week to do laundry, check the oil tank, and clean a litterbox. WOW I found a tiny 8" garter snake baby at the foot of the stairs. In the past I have found a dozen or more during the summer months but to find one of this size in the winter months is just amazing. The poor "guy" was so dehydrated and close to death. I put him in an ice cream pail and put some water in it and just hoped he could plump up a bit. He lived on the kitchen counter under a light for a few days and started to look perkier.....with his little head peaking up out of his forest floor bedding.

We are so fortunate to have a Snake Man who lives in our neighborhood who agreed to take in the orphan and has since named him Homer! A homer he is and he has a good one now with one who knows how to take care of him and who will keep him alive until spring when he can go out to the wild and share his own snakey story of survival.
Posted by sherri at 7:01 PM No comments: