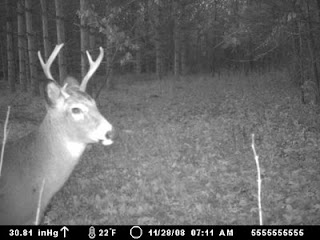 This has been the week of regular Deer Season here. It is the "Main Event" of several other deer seasons that lead up to it. Namely, bow season, T Zone, Youth Hunt-- there's probably more. And after the main event there will be a week of muzzleloader, and probably another T Zone and then bow season will reopen. There is probably a three day season in there for women over 55 using lutefisk clubs, but I would have to check the regulations for the dates on that one.
At any rate, it's the big deal. Don got a new blaze orange camo shirt that he can wear while sitting in the lazyboy by the picture window. This qualifies as hunting in Wisconsin. His walk through the hunting grounds usually begins at the crack of 9:30 and he's usually back in time for coffee and papers around 11. The mornings have been especially nice this season with temperatures above freezing and sometimes up to near 40 which makes for a nice outing.
This year is an "Earn a Buck" season which means hunters have to shoot a doe before the "earn" the right to shoot a buck. It's a hideous dictate from the DNR, in cahoots with the insurance industry, in an attempt to reduce the deer population (kill one doe=killing up to three!) and it goes against the nature of any real hunter. Yesterday he came upon two does who were eating alfalfa in our 4 acre pasture. They became panic stricken and were running around looking for an escape route. He had the "right" to shoot that doe but both eventually leaped over the 4 foot fence and bounded for the woods.
Later that afternoon we were both hunting from the lazyboys when a huge doe appeared in the grove of soft maples by the sand bar (in the top photo--just to the right). We scoped her with our binoculars as she browsed. As we enjoyed watching her it was agreed we had more use for her to make these appearances than to sit in our freezer.
We have been using our trail camera for several months now and getting some good shots once in awhile. It has been only recently--OK two days ago--that I started transferring the shots to the computer. Duh. What have I been waiting for?
Had a lovely shot of a nice 10-point buck, some cute little does hamming it up for the camera, some raccoons and even a fox! But, nooooo, I didn't SAVE those pictures.
So, better late than never. I hope that big guy comes around again.
Posted by sherri at 7:17 AM No comments: 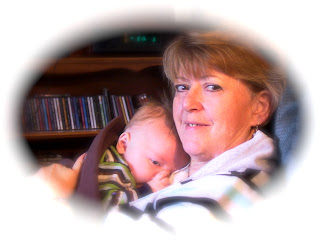 Had a great visit today with friend Lois and her recent grandson, Anders. And a fine fellow he is! At 3 months old he got to travel with Gramma Loie to Catfish Corner. Loie and I got a chance to talk about past and present and later we had lunch and Anders got used to his bottle. His mommy Lora went to work today and this was their first day apart.
Gramma Loie did a fine job of holding, cuddling, cajoling and encouraging Anders to his bottle--and by the end of the day the bottle was gone and they were ready to head home.
Thanks for your visit! It was fun to catch up and get to meet Anders! I bet we will get a chance to do it again soon!
Posted by sherri at 7:58 PM 1 comment:

Email ThisBlogThis!Share to TwitterShare to FacebookShare to Pinterest
Labels: friends 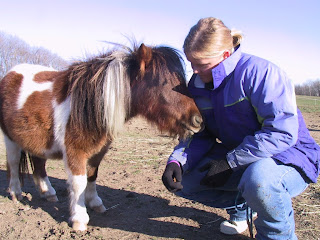 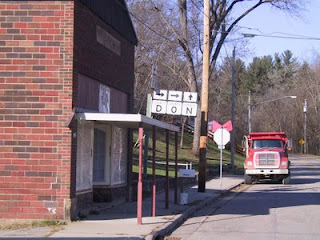 I finally got up the hill to see friend Fran's miniature horse, Ladybug, on Friday. What a CUTIE! She is so tiny and fuzzy and adorable-- I think I need one! She is only 18 months old but it sounds like she could run the lives of much older, larger horses. Helga and I took the milk run to Arkansaw (I know it seems like a long way to go for milk, but this is ArkansaW, Wisconsin!) It was a beautiful fall day and I had the camera along so it was fun.
This is so silly, but the county road signs in "downtown" Arkansaw alway crack me up! Sorry, Don! The main street was packed with hunters in the local establishments getting "ready" for deer hunting.
Posted by sherri at 5:40 PM No comments: 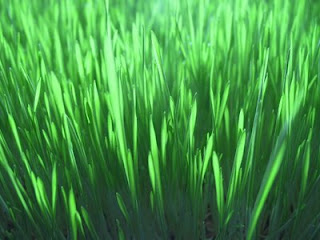 A new endeavor that began recently is the "wheatgrass project". An article in the "Country Today" inspired me to get the few supplies necessary to grow wheat seeds into sprouts. The lovely green spouts then get juiced into a powerful health drink. I have been growing my little crop hydroponically with enhanced sea mineral nutrients in the guest bedroom and after a little more than 10 days of growth it is now tall enough (about 7") to harvest. One ounce of juice is equivalent of 2.5 pounds of fresh produce and is touted literally as a "blood transfusion" of healthful nutrients and enzymes. Yum! I can't wait to try it! I am always on the lookout for natural healthy things that I can do to help Don with his lymes disease issues so this seemed like a worthwhile experiment. Will keep y'all posted how this juicing thing turns out. After being sick for the past two weeks I hope we can both get our immune systems revved up!
Updated 1:30 pm--My tray of wheat sprouts netted out about 6-7 ounces of juice! I lost some to experimentation, but I only expected about 4 oz. so I'm considering this a bumper crop. Don and I each had a 1 oz shot and --- it tasted --- not as "green" as I was expecting. It's got a little kick--kind of tangy, but not like a mouth full of spinach! We agreed "We can do this!".
Posted by sherri at 11:16 AM 1 comment: 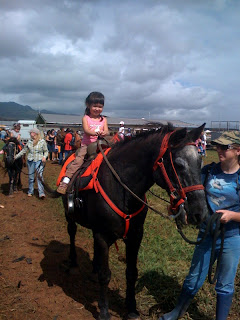 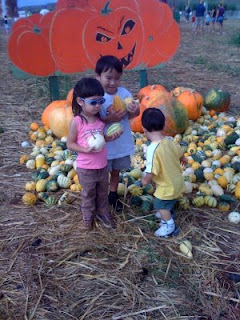 hese great photos of my cousin's daughter, Paige, from her Grandma Evelyn. Paige and her family live on the Hawaiian island of Oahu, and this was her first ride on a horsey. She looks like she's loving it!
Then there was the visit to the pumpkin patch where she seemed to be having an equally good time. Thanks for the photos, Evie!
Posted by sherri at 9:29 AM No comments: 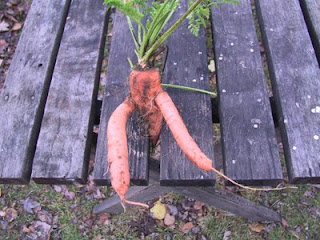 Our 70 degree days of last weekend are officially gone. Gray days, wind, rain, snowflakes and snow pellets are our new visitors. Unfortunately, we both picked up a cold bug and have been coughing and schnorteling all week. Between cups of hot tea I got enough energy rallied to go out to check the greenhouse and covered up the lettuce with flannel sheets. The plants have been doing amazingly well inspite of some freezing nights. I pulled the last of the turnips and found the deer have been eating the tops off the remaining carrots. I pulled up a few to take to the house and found this funny guy. Another sure sign of age--finding great humor in mutant veggies!  So, Don says maybe I should put it on eBay. I checked out "carrot" and got it narrowed down and found SOMEONE ELSE HAS AN EVEN BETTER MUTANT THAN I DO!  I haven't figured out how to get the photo but check it out--search "human carrot" and you will be as amazed as I was. It really looks like a little human boy body. Nobody has ponied up a bid--starting at $1. That is probably because they want $12.50 to UPS it to the lucky bidder. Now I'm wishing I would have photoed the giant radish that went to seed. It looked exactly like the very sunburned hips, thighs and calves of a very lumpy chubby lady! I have an eyewitness--(right, Mary Ann?!)--who will attest that we chuckled over it because I expect to start looking the same way.
Posted by sherri at 10:56 AM No comments: 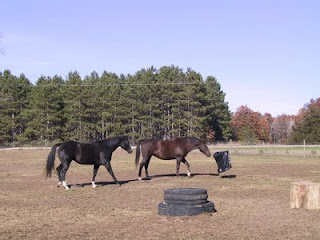 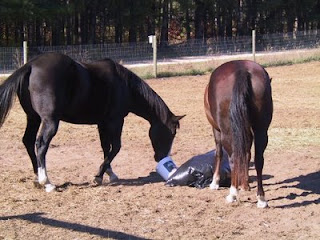 Horses are so goofy! One little thing that's new in their surroundings and you have a circus on your hands. Being Halloween, I played a little game of Trick or Treat with the girls! While they were hanging out in the box stall, I took two wire tomato cages, two big black plastic bags and some treats out to their pasture. After setting up the cages I put the bags over the support and put a horse treat on top. It was just windy enough to create a spooky billowing and blowing of the plastic.
Sure enough, they got curious and came around the side of the barn. Proceed with ** SNORT ** STOMP ** BOLT ** WHAT'S GOING ON HERE?! DANGER!!! ** It would be funny if it wasn't so potentially dangerous -- not to them, but if one was riding a horse that was this reactive in this situation on the trail there could be trouble. This little simulation is the beginning of future plans to have this same test out on the trail--- for real.
Cerra turned out to be the leader this time. How interesting! A skitterish Cheyenne was on her heels and jumped back at the slightest movement of the plastic. It didn't take long after a little circling for Cerra to home in on the fact that it wasn't going to attack and--gee, I smell treats! She stuck her nose in the plastic bag and came out with the surprise. Chy came over, too, and she got fed a treat by hand. Then they knocked the whole thing over and ground the plastic into the dirt. Mission accomplished?!
Cerra spotted the other spooky object and headed over to it cautiously. She's smart--didn't take as long to find the next treat while I was setting up the first display in a new spot. We did this at five or six different places and when I ran out of treats it was game over. They were the only trick or treaters we had at our house!
Posted by sherri at 10:14 AM No comments: 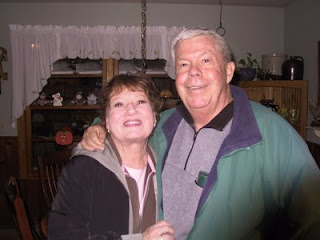 Had a great visit this week with our friends, Al and Mary Ann Ormson from Luck. They arrived on Tuesday afternoon and we enjoyed a roast goose breast (wild!) dinner with all the fixin's. Wednesday Mary Ann and I took the long way to Stockholm where we had to visit some of our favorite haunts. We strolled Abode Gallery, Out of The Blue (gifts) , The Palate  (kitchen/cooking) and Mary
Ann came out with a jar of honey, a clump of blue cheese and a pretty container for some weeds!
We ate out at the Backwaters in Nelson Wednesday evening. They have a fun "all you can eat" shrimp night and it is really good! We came away stuffed as usual. By Thursday morning they were on their way and we have the memory of good friends and good cheer.
Posted by sherri at 10:02 AM No comments: