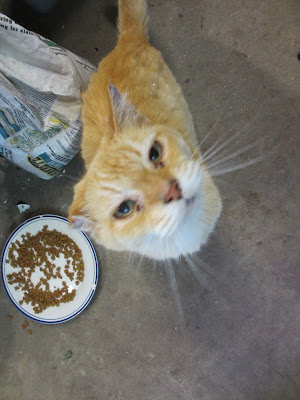 Here we go again! Don told me I had better come to the house. There was a cat up the tree. Might be trying to kill birds. You better check it out.

A can of cat food later, we became fast friends. A trip to the vet indicated he was a HE, already neutered, kinda old....maybe, very undernourished, but had no dread diseases like leukemia or FIV. A bad tooth to be removed in the future, some eye ointment for now and a revisit in 4 weeks to booster the shots. No ear mites, even though he has a pronounced cauliflower ear! No fleas....another blessing!

$200 later, we have another cat.....WHICH IS AVAILABLE FOR ADOPTION! But we know that probably isn't going to happen. People like "pretty" cats. Not old cats who look kinda beat up, with ookie eyes, and funny ears with rips and tears.

What's in a name?
That was the next question and as I posted on Facebook he had his ideas of what he wanted his new name to be. I asked him what he wanted to be named. Had lots of good suggestions from the FB crowd, too! But one night I woke up in the middle of the night with the name Alex. OK, Alex it is. Imagine how embarrassed I was to find out he wanted to be named Aristotle!  Oh, well. Sorry, Alex. Or Aristotle. You have a simple name and a simple home and we hope everything works out just fine. Lots of love included. No extra charge.