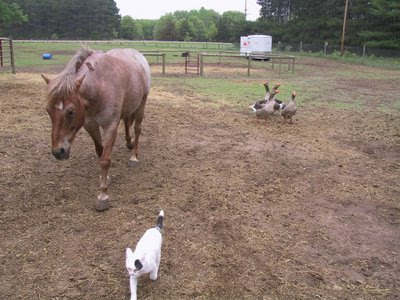 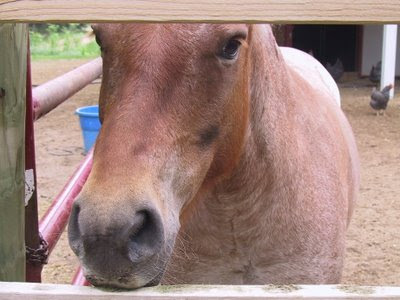 Actually, her name is M&M, but I think Emmy suits her better. A sweet cross between her mom, an appaloosa mare, and a pony stallion. Her coat is red roan with a buffy white blanket-- just a couple little subtle appy spots. She's really more a small horse than pony and is 8 years old.
Our neighbors were moving and selling off their horses so I took the opportunity to increase our herd. The main objective is to have a horse for the niece and nephews to learn on this summer.
The welcoming committee (Paisley and geese) were on hand for her arrival, and later she got to meet Chy and Cerra amid lots of squealing and kicking. Everyone survived and finally exhausted themselves to a tenuous acceptance. By tomorrow they won't be able to live without each other.
This will be a fun opportunity to start "Level 1" with a new horse--she needs it!

Posted by sherri at 3:57 PM No comments:

Rewards from the garden....

...came yesterday with the first little picking of spinach leaves and some radishes. Made up my version of the health food salad for lunch today while I update the bloggy.
My Popeye Salad
Fresh spinach leaves
Radishes
Sweet onion - thin sliced
Sliced mushrooms
Sprinkle of ground flax seed
Spray of Bragg's liquid aminos
Dollop of homemade blue cheese dressing (secret recipe)
I y'am what I y'am and I feel stronger already!
I got the peppers and tomatoes planted yesterday and tilled the melon area for today. Put in buttercup squash, watermelons, cantaloupe, pumpkins and some gourds for fun. I bought "Jack Be Little" pumpkin seeds for the little dwarf pumpkins and they went missing. Hope I can find them before I run out of space.
Posted by sherri at 1:47 PM No comments:

Email ThisBlogThis!Share to TwitterShare to FacebookShare to Pinterest
Labels: gardening

Sounds like a good band name! Time has been flying by so quickly and every day has been full of spring jobs to be done. I love it all and this is what we have been waiting for. This past week has been spent doing one of the tasks that I could live without--the weeding of my flower garden patches. I got a whole pickup load of milled bark mulch to apply as I clear out the weeds. So I hope I won't be doing the HEAVY WEEDING again for a long time. If I keep up on it--maybe never! My new middle name is MULCH.
It has been very warm today--90 degrees for some bizarre reason and I feel like I have been in a convection oven all day for I am as  ".....brown as a berry from riding the prairie..."
Riding? What is that? It's gardening season!! Friend Fran is getting ready to hit the road with Farrah Green (from Aberdeen!)  for five weeks of clinics, events, lessons and learning so I'll be "on my own" with the girls. We have our PATTERNS to learn while she's gone!
The Benson kids (nephews and niece) were here tonight and Cerra was the old pro giving bareback rides. Cade and Carter were the cowboys--our little cowgirl Paige decided next time might be soon enough.
Posted by sherri at 5:22 PM No comments: 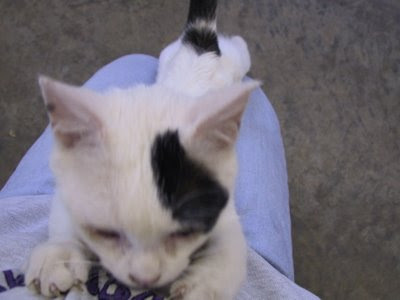 Paisley has turned out to be such a little love bug! He latches on to me every time he has a chance. His little "squeaky flywheel" chirp is most endearing and he has fit right into the farm routine. He is Helga and Cerra's kitty and he loves to chase chickens and squirrels. He can climb a tree like nobody's business. He has gained over three pounds since he showed up this winter.
But, the sad truth about Paisley is that he has FIV which is the feline version of the immune deficiency virus. He was diagnosed after his runny eyes didn't clear up after a round of antibiotics. His friends at the vet clinic were all very sad at this diagnosis and I had the feeling they wanted me to put him down right away. I have kept him separate from our house kitties and that turned out to be good because he can't be kept around other cats or they risk contracting the disease. I was buying time to find out about this condition. I left the vet's office with the intention that he could live as long as he wants to. When things turned for the worse we can deal with what needs to be done.
I researched FIV on the Cornell University Veterinary School website and found out that FIV isn't a reason to automatically euthanize a cat. He probably contracted it from his mother and other than birth, it is usually spread by cat bites, scratches, and other direct contact by warring males. He could live for years before he could be overtaken by some kind of infection.
It's sad that he will have what might be a lonely life away from other cats, but good in the sense that he can have lots of fun just by being ALIVE! And what could be better than just having a chance to be--whatever that may be--and for however long that may be. It's no different than anyone else.
Posted by sherri at 8:17 PM No comments: 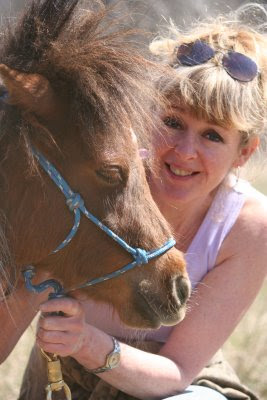 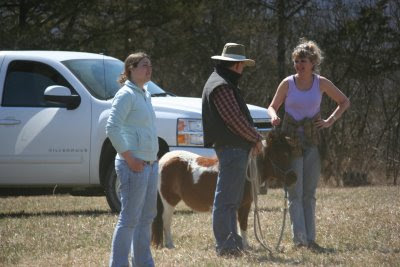 Fran shared these photos she took at the Farrah Green lesson day. She is going to start a little side business of taking photos at events like this. People love to have pictures of themselves and their horses! I can attest to this. It's hard to take your own picture so I think this is a valuable service! She caught me hugging her miniature horse, Ladybug, the most lovable little bit. Fran's student Phoebe uses her for lessons and had her lesson with Farrah with LB in tow.
Posted by sherri at 4:32 PM 1 comment:

Chicken is better than Dead Duck

I am thankful Fran was able to ride with me today on the Trailblazers ride. She broke her toe after a horse stepped on it and it was doubtful that she would be able to ride. But, tough girl that she is, we were able to take Cerra and Cheyenne out for an official trail ride with the club. There were about 50 riders and horses of all sizes and colors. This was Cheyenne's first trail ride and after her clinic experience two weeks ago, it just fell into place.
I rode Chy for the first 3/4 of the trip and then we decided to trade horses. We had no sooner made the switch and were on the home leg when one of the rider's horse spooked when her saddle suddenly tipped off to the side! The rider got off ok and then the horse made a wild gallop up through the trail. I saw this unfolding and the horse coming at us and both Fran and I got off our horses immediately and took control of them as the other horse came racing by. She eventually got stopped by the group ahead of us and all was well, but the best part was I realized my new instinct was to get OFF to control the situation instead of letting the loose horse spook mine and have two accidents in the process. The Parelli voice spoke again--"Better to be a chicken than a dead duck!"
And coincidentally, the charcoal chicken dinner that followed was delicious!
Posted by sherri at 7:56 PM 1 comment: