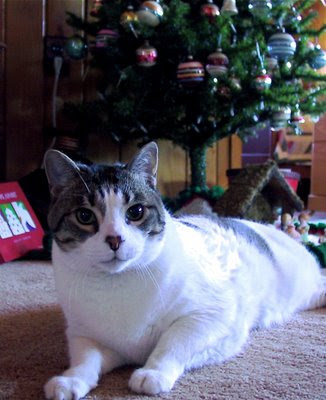 Our friends, Pat & Ione Timm have spent the week in Rochester as the result of Pat's sudden serious illness and major surgery. Their cat Simba was left home alone and Ant Sherri was given the key to visit daily to pass out his alloted one-half cup of food and a treat. Simba is a very big baby boy and notorious for being so shy around strangers. Whenever anyone would visit he would run and hide. I was hoping I could use my best kitty voice to call him in the first day.
I entered the silent house and read my instructions and went about the business of getting his dishes filled, chatting kitty baby talk and hoping his curiosity would be greater than his fear. As I turned to go to the basement a loud MEOW announced that "I AM HERE AND WHERE IS MY MOMMY?!"
Yessss! The cat magnet still works! We are best buddies now and I even have a few new terms of endearment for him which include Simboomba and Brush Lush.
Pat & Ione's christmas at the hospital wasn't what they were planning for. The tree is still standing and there will probably be a big loud family celebration there in the weeks ahead. Simba's christmas wasn't what it was designed to be either. He was supposed to have been spending several days avoiding the grandkids by hiding under the bed, or in the basement, or wherever his secret hidey holes are. Instead it was quiet for him--perhaps a little too quiet, but soon his family will be home and life can return to normal.
Posted by sherri at 4:59 PM 1 comment: 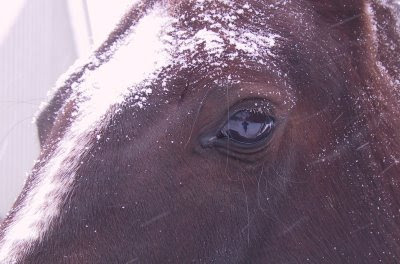 ....it snowed.....again....yesterday......to the tune of another 6 inches on top of what we already had. So we probably have a foot or more to slog through. It's 5 degrees out right now and was minus 10 this morning. The horse waterer froze up sometime overnight and the girls were eager for me to get it going. The top was frozen on and the bowl was dry. Kicked it until it came loose and I got the parts out. Chy and Cerra were very helpful - as usual. I went in to get buckets to run water for them so I could distract them from the project at hand. By the time I got back they had it going! Horse noses are very warm and I think they mouthed the frozen spout and brought it back to life. They both drank a long time and took turns jostling each other out of the bowl until they each had their fill. I can't help but pray for the horses and other creatures who are out in this weather without food and shelter. Cerra had the chicken door open again so I rounded up the hens and locked them in this time.  Sorry Cerra. It's too cold to have them out running around. Horse hay went in the box stall this morning so they can be out of the wind. They usually don't like to be inside, but today was an exception. A few visits during the day with carrots should make the day more interesting.
Posted by sherri at 10:59 AM No comments:

Don came in carrying a limp furry carcass yesterday. My first thought was the black squirrel that has been visiting the feeder but it was a mink! He found a redtail hawk in the backyard working on it's prey before he intervened. Too late for the poor mink who had been reduced to a bag of skin and bones. Keeps one in mind of the rules Mother Nature has mandated about prey and predators. Our geese were reluctant to come to the house yesterday morning so perhaps they knew what was going on and the potential threat to health.
Posted by sherri at 7:21 AM No comments: 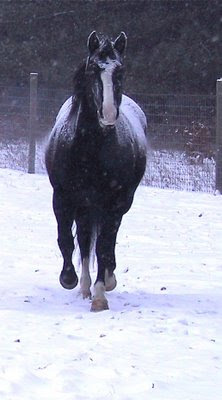 It's been snowing all day at Catfish Corner and since Don was feeling cruddy we stayed home and postponed an eye appointment for him at Eau Claire until after the first of the year. I made a nice roaring fire in the fireplace and he rested while I made more Christmas treats. Today was two batches of peanut brittle and all things covered in chocolate.
It's only 5 degrees out and I saw that Cerra had opened the door on the chicken room. (A special talent she has--opening doors, gates, hearts) So I had chickens out running around instead of staying indoors and doing their job of egg laying. The little golden Buff Orpingtons - affectionately known as "The Buffingtons" - seem to think they are above living in the hen house and are constantly forming their own colony in the other box stall, or on the hay bales, or out in the woods. I have found that my Parelli carrot stick works well to round them up and get 'em moving back to home. Just call it Chicken Savvy.
They are this year's chickens and were late bloomers. Some are just starting to lay tiny little eggs. My daily gathering has grown to up to 21 eggs. Today was good at 19. I'm getting more customers than I have product. The pullet eggs are small but so good. Deep orange yolks that stand right up. If you wanted to eat a raw egg, I think this would be the variety to use. There is no comparison between a battery raised egg and a home flock egg! Fried in a pool of butter........but I digress.
Since I got the chickens in I figured the horses could be fed early and then I'm done with the outdoors until morning. Cheyenne (pictured) came running and thought that was the best idea I have had in a while. A scoop of black sunflower seeds for a treat and a thick leaf of hay and it was bon appetit at Catfish Corner.
Posted by sherri at 3:24 PM 2 comments: 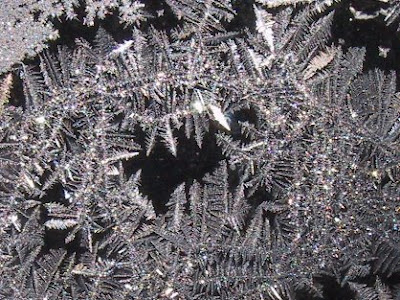 Yesterday at noon it was a balmy 45 degrees. A few short hours--4 to be exact--we dropped to the teens. The drop continued though the evening with brisk winds that are continuing today. And we woke up to -2 degrees! For our two above freezing days we will now probably have icy footing until spring. I took a walk around the loop this morning and the ice cleats need to be worn next time!
The frost on the windows looks pretty, but the prospect of no horse riding on the icy trails is depressing!
Posted by sherri at 1:05 PM No comments: 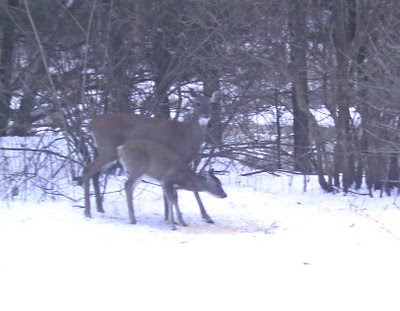 Now that the hunting season has almost ended, we are finding the does are showing up to raid the corn piles in the yard that we serve the birds. Yesterday they appeared by the barn a little after 4 pm! Perfectly light to see and they actually drove a few chickens out of the woods. This tiny TINY little curious fawn was within 6 feet of one of the chickens. Where was my camera for that? Talk about cute.
This photo was taken from our living room.
Posted by sherri at 11:39 AM No comments:

Tasty treats for the holidays! 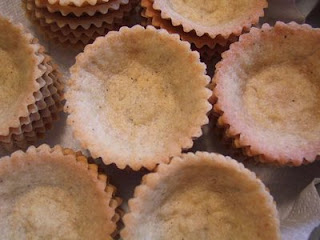 The sunbuckles, the pecan puffs, and savory appetizers rolled out of the oven this week. More to do, but needed to get started and into the swing of making a batch or two every day.
We were happy to have the Ormson's stay with us for an overnighter while they journeyed back and forth to Rochester for Al's medical tests. So it was good to have holiday snacks on hand.
Today I'm making a new one for me - Swedish Kringle Cookies. I have had the regular kringle but as a cookie will be interesting. You can't go wrong with a pound of butter and a cup of cream so I'm thinking they should be good!
Posted by sherri at 11:50 AM No comments: 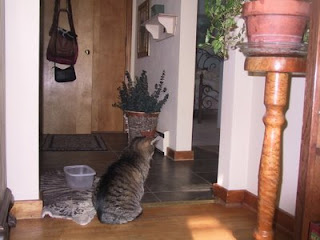 Molly looks into the bedroom where Jack is perched on his pillow. 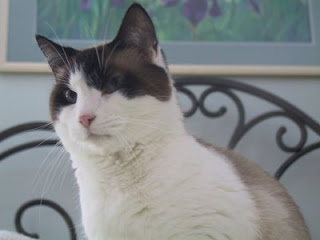 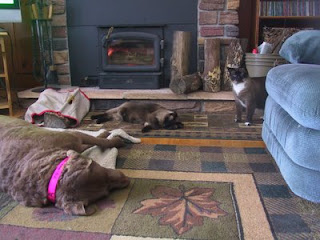 We are all pretty relaxed around here today. The Packers are playing, the fire is blazing and the pets are lazing. I love to take pictures of "the kids" and even caught shy little Timber as he peeked around the chair.
The shyest one of all is Jack--and he pretty much just lives in our bedroom. His nemesis is Molly. He hates her. It's as simple as that. She is the big boss of everyone and he has gone to war with her and decided that wasn't fun either.
Posted by sherri at 1:05 PM No comments: