Just Hangin' Out and Horsin' Around 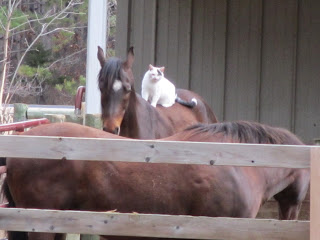 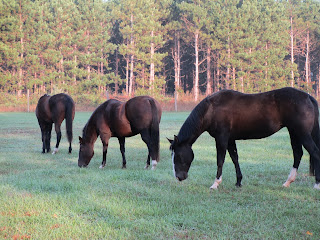 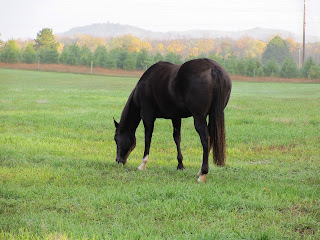 Alex and The Fisherman 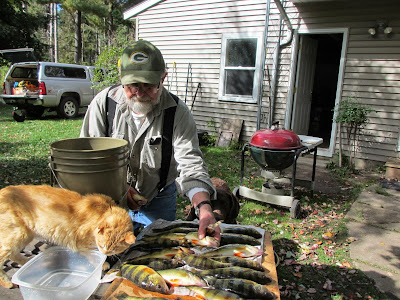 Fall fishing at Catfish Corner has been productive! Alex is very curious about the whole process and helped recycle some of the parts that we find less palatable.

Alex has earned himself another name. Don thought he should be given a more nordic name....like Eric. Which is fine....Eric it is. However, I had to expand on that moniker to be Eric the Complainer.

Eric the Complainer is quite deaf and I don't think he can HEAR himself because his voice is horrendous. Loud, plaintive and, well, it's kind of annoying. Hate to say that, but a complainer he is. He doesn't like commercial cat foods. Which is probably a good thing! But it comes to me that I have to have a menu for his voracious appetite.

Fish guts! Yum! A fried egg for breakfast, raw hamburger for lunch. Evening dinner might be some roast and mashed potatoes. You name it, he'll eat it. As long as it's not "cat food".
Posted by sherri at 11:32 AM 1 comment: 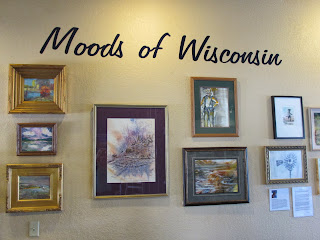 The intrepid band of Art Girls installed the new exhibit at Wings Over Alma yesterday. Moods of Wisconsin will be up until mid January so there is plenty of time to take in the show. 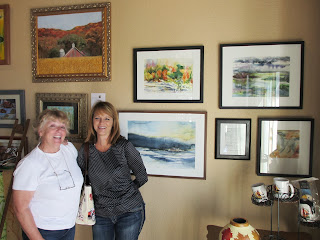 Jan Brunkow (l), and Wendy Ike (Art Girls!) stand next to Wendy's beautiful watercolors. The theme this time is focused on the abstract and impressionistic views of Wisconsin scenery and objects. 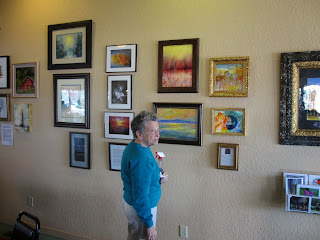 It's a colorful and intriguing display of oils, photography, watercolors and other multimedia art!

Visit Wings Over Alma Art and Nature Center and get your MOOD on!
Posted by sherri at 4:33 PM No comments: 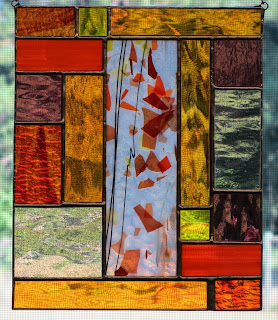 It's been a very productive summer out in the shop. And right now lots of new glass is being placed at The Store, in Menomonie, and also to the White Oak Gallery in Alma for the fall season. 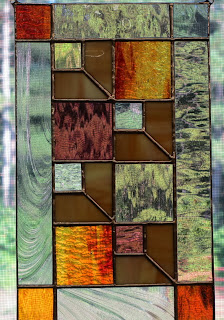 I really love the warm autumn colors and I am constantly trying to find new color combinations that are fresh and exciting. 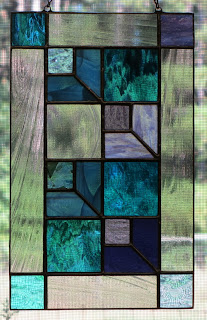 Panels for kitchen cabinets. The long narrow shape made traditional stained glass techniques less desirable. These were done with individual copper motifs that I cut out and distressed then glued directly to the opal pale amber glass. The barbed wire was created with copper wire twisted with the barbs just like the real thing only in miniature.