Something to Crow About!

When the little chicks arrived just before the 4th of July my lone rooster in the bunch had a little green dot on the top of his head. 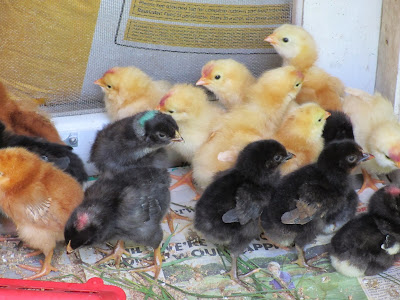 When that little green dot wore off, I lost track of the little guy, and frankly, I thought he was gone. A hawk here, and owl there.....the pile of feathers in the pasture. Not everyone makes it to be of old age around here. It wouldn't be the first time a young rooster met an early demise.

But early this week when I let the flock out in the morning I heard the unmistakable call of a young rooster! The tin-horn, weak bellering.....not really a cockadoodledo, but the sound of someone stepping on a kids toy that has half-dead batteries. There he was....right in front of me and I didn't even know he was there!! 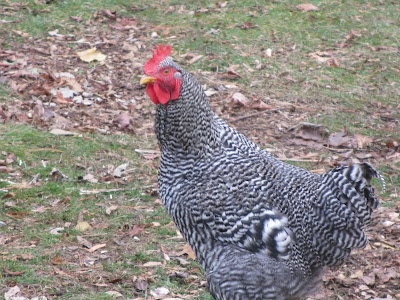 Ideally dressed just like a female barred rock hen, there he was! It's embarrassing!! He was camoflaged as a hen all this time. Other than the fancy comb and wattle. 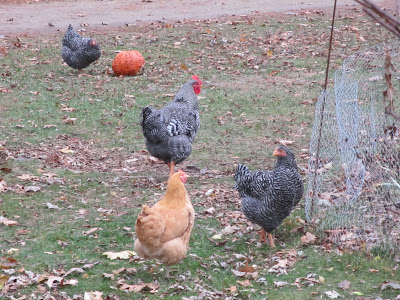 He blends in while he struts around with his little group of hens and guards them. Now that he's old enough to start a crowing, I can hope that those hens will be starting to lay any day now. 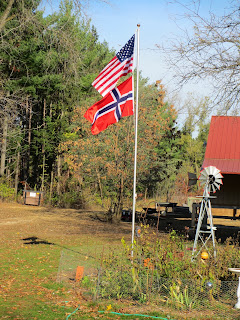 I bought Don, the Happy Norwegian, the Norway flag for his birthday in March. We got the flagpole in July and managed to get it installed in November. Procrastinators that we are.

This link for the Norway flag had some interesting history about the origins of the flag designs:

It's notable that this style of Norwegian flag was first officially flown in 1899.  In 1905 Norway regained its independence and could now fly its flag openly to welcome its new Norwegian King -- who was Danish!