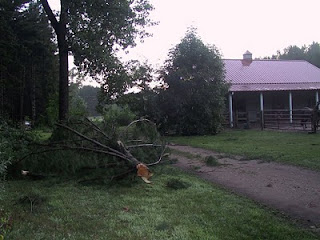 We waited and waited as the storm line slowly made it's way from NW Minnesota. It took all day of sweltering in 93 degree temps and heavy humid air but about 9:45 pm it finally hit us. This is the first big wind we have had in a storm this summer and it snapped off two tree tops in our yard. 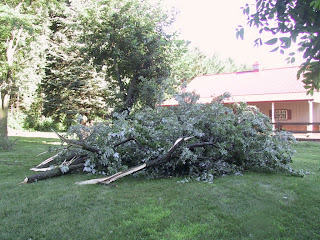 We were lucky this pile missed the nearby power line into the house. Don's going to be giving the chain saw a good workout. I think I'm busy today.
Posted by sherri at 8:40 AM 2 comments:

Hanging out with the Chickens 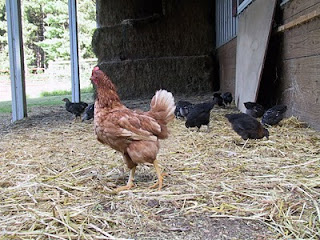 Our self appointed Mother Hen has been keeping a close eye on her charges. None of our previous broods have had the advantage of having a foster mom. This "Production Red" is such a sweetie. She first adopted the little Wyandotte rooster. She ran around and found the tastiest bugs--pointed them out to him and let him gobble them up. Then she would scratch up goodies--do her little cluck call and over he would come to eat her findings. Now the other youngsters are hanging closer, too. It pays! When it's time to go in for the night she nestles in the chick area and protectively spreads her wings over as many as she can. They are getting pretty big so not as many fit anymore. 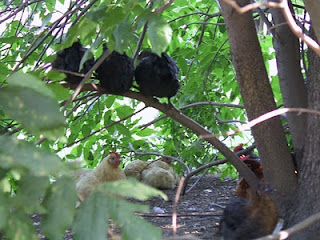 It's relaxing to just sit and watch their little society. We have a big bushy tree that they gather under and hang out. Some of the older hens are grumpy and there are some territorial squabbles but for the most part everyone gets along. 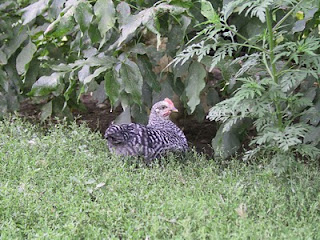 Our new little crown prince is growing. He is a Wyan- dotte, but he looks like a Barred Rock hen. He is about twice the size of his sisters. I fear he might be the only rooster out of the four we started with since we have lost several to coyotes. The little fellas get bold and go to the edge of the yard which is prime hiding grounds for the predators. I was hoping to have more roosters, and we might, but this is the first one to show signs of development. 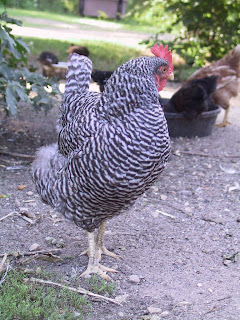 It was so blasted hot and humid yesterday that we lost one of our Barred Rock (right) hens (not this one!). The hot temps really take a toll on the older ones and this one in particular had been getting more feeble in the past week.

Don has been ordering new equipment to do some serious coyote trapping and having a dead chicken as prime bait should help.
Posted by sherri at 7:25 AM No comments: 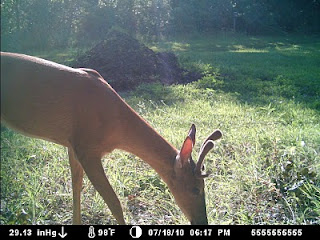 The trap got tripped last night and no coyote. However, just after Don set it, this guy came strolling over and casually stuck his nose in the camera. This was the best shot--and he has some impressive new antler growth coming on.

Helga picked up on scent last evening by the barn and she got all excited. She can appear pretty tough when there is no actual threat.
Posted by sherri at 9:46 AM 1 comment:

Andy Get Your Gun

The general philosophy at Catfish Corner is that everyone can live here, predator or prey, as long as we all get along nicely with each other. That has worked for us for many years until the coyotes decided it wasn't good enough to just eat wild game. 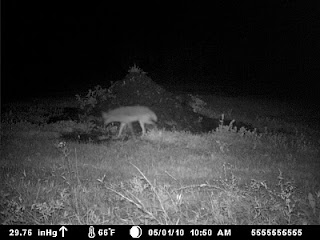 A couple weeks ago I had the good fortune to pop a bold one out in the driveway who was trying to kill a chicken. After losing dozens of hens since spring it was very satisfying to even the score. After a couple quiet weeks without any losses we hoped they had moved on. However, this week we lost a baby goose so this means the war against coyotes is on again and this most recent attack has us looking for a more effective solution. 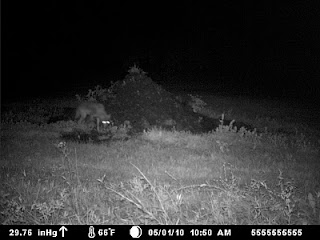 Don put meat out for bait by the green house and the trail camera to see if they can be drawn in. Last evening we got the pictures were were waiting for. Now he will set a trap out and hope this one comes back for another free meal. Hopefully it's his last one.

And yes, I did update the date and time on the camera!
Posted by sherri at 10:19 AM 1 comment:

Email ThisBlogThis!Share to TwitterShare to FacebookShare to Pinterest
Labels: coyotes

Put the dates on your calendar and plan to see some beautiful art, fall leaves and the glorious river valley.
Posted by sherri at 3:44 PM No comments: 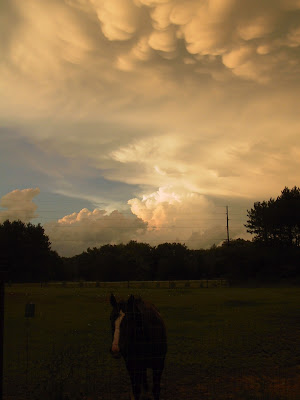 After a terribly humid day we finally got some rain yesterday afternoon. After the rain had passed the beauty of the backside of the storm revealed itself. The foreboding mood continued----and more storms were forming right over us. 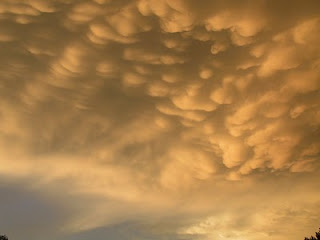 The puffy bottom clouds were at times looking like a big pan of parker house rolls... complete with a golden glow as the sun got lower. 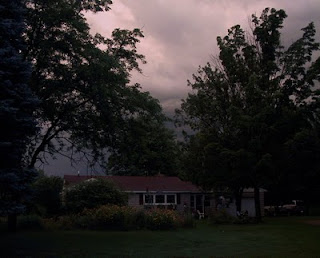 As we finished up feeding the horses and gathering up the chickens for the night the next wave of storms rolled in. This round had the thunder and lightning and we ended up the day with 1.8" of rain.
Posted by sherri at 4:30 PM 1 comment:

Email ThisBlogThis!Share to TwitterShare to FacebookShare to Pinterest
Labels: storm 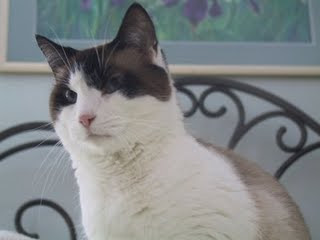 My little shy fellow Jack has been having his own health crisis these days. He has been losing weight and after a trip to the vet I found that chronic kidney disease is working on him.

The first trip a few weeks ago resulted in a course of antibiotics. I thought he had bad teeth, but evidently the kidney disease was causing his icky mouth. I administered his medicine and I suddenly had a new cat. Not a healthy one, but a new one cat-onality-wise. He was moving about the house! He has lived in our bedroom for the past three years and rarely ventured out. Now he's sunning in the window--and hopping up on laps. This isn't the Jack we used to know. I even VACUUMED near him and he seemed nonplussed. So, the Sick Jack is more outgoing than the Regular Jack. I'm not sure how to take this.

We are watching him all the time now--which makes it easier to monitor how much water and food he gets. I got a bag of lactated ringers for him on Saturday and gave him a dose of fluids subcutaneously and that seemed to perk him up. I suspect this will become the routine that could continue for a long time. Let's hope for a long time.
Posted by sherri at 3:46 PM No comments:

Returning to Life........and putting on a happy face 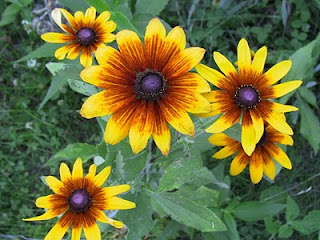 We were shocked and saddened at the sudden loss of our friend Jon Ormson who decided to end his life on June 25th. The horrible call came from my friend, his mom, MaryAnn, and it launched a wave of grief. He was such a great guy and was such a joy to everyone who knew him. The funeral was held at Luck and I went to spend the day; to hug those who needed the hugs (we all did) and to share the sorrow of friends and family who were dealing with circumstances we never would have dreamed of having to address. The pastor did an excellent job with the aspects of such a death and the big question of WHY. Of course, that is the big question that we will not be able to answer. We wish so much that he would have had time to make a trip to Catfish Corner. "He made this world a better place for us. Even though it was difficult for him."


Getting back into things around here, I can say the heat and humidity has been pretty heavy. The perennial flower garden has reached its colorful stage and the bees really are enjoying the Bee Balm.

Yesterday seemed like a good day to join some pony pals for a little ride. I trailered Cerra up to Ramona's in Porcupine valley and friends Wendy and Amy joined us for a trek that took us up and down some good hills, over some hilltop farm fields and a little road riding to tie it all together. The mosquitoes really feasted on us. Sorry about those welts, Amy! 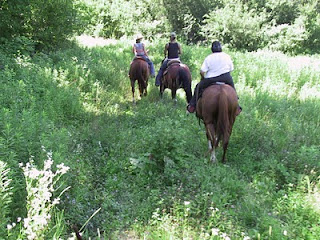 We had started at about 10 am and by the time we got back it was getting hotter out and we felt like lunch so we drove to the village of Arkansaw and had a bite at "For Pete's Sake". Pete's fish sandwich consisted of two perfectly deep fried fillets on a really good bun. A generous dollop of tartar sauce and an ice cold Leinie's really hit the spot. We shared a big basket of french fries and onion rings, too!

Cowgirl lore at this point would opine that things always look better when you're on the back of a horse. Or, that the outside of a horse is good for the inside of a cowgirl. Hard work and horses have always put my mind in a good place. I hope our friends who grieve can find their peace in a fashion that suits them, too.
Posted by sherri at 1:17 PM No comments: