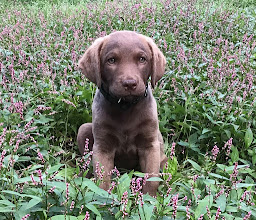 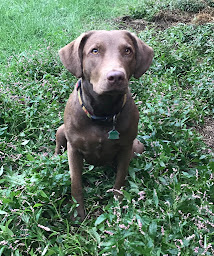 Last Labor Day I picked up our new Chesapeake pup, Phoebe. She's done some growing in the past year! The one dog wrecking crew has several accomplishments over the year. No novice dog trials or ribbons, just a half stack of firewood dragged throughout a yard that sports lots of leg-breaker holes. 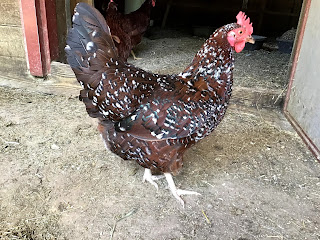 Yup.....still here. Summer is over and it went too fast. The Covid fiasco has continued and all the resulting craziness. Here's pic of my favorite hen...Susie the Speckled Suffolk. She WAS the sweetest one of the flock. Followed me around! Let me pick her up! She evidently was "picked up" by a predator, as have most of the flock. Down to nine hens. No rooster anymore either. I'm just hoping the remaining nine are the SMART ones who will stay out of harms way. No more chicks until spring.....maybe. 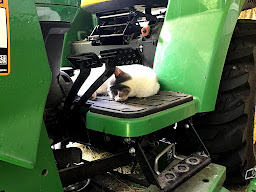 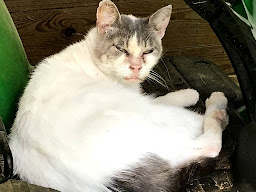 Then there was the cat.
I have prided myself as a cat whisperer; however, I met my match with this one. She showed up on Thanksgiving Day. The same day my good friend passed away. Said friend always commented if she came back she wanted to be an animal at Catfish Corner! My interest in this little refugee was keen. The food dishes were filled, and I did my best to make the new "outdoor" cat feel welcome. But, WILD, wow! This was not a friendly cat. I didn't even know if it was male or female! All I knew was it came, it went, it camped out here aaaaaaall winter through harsh conditions, tucked behind a big hay bale. No amount of kitty talk or coercing would get this feline to soften up and have a nicer life. Figured it had to be a male! The grumpy face, the battle scars. Yup, this cat is going to be called Roman. Roman the Roamer.
Roman would absolutely NOT let me touch him. I got several scratches in the process even through gloves. Deciding discretion would be in order, I spent lots of time every morning and evening just sitting with Roman to no avail. He was feral and it was probably always going to be.
Spring and summer arrived and Roman's mousing skills really came in handy. Since he was well fed he didn't always feel obligated to eat the catch, but would leave the bodies for me to bury. He started looking better! The fur was fluffier and when my friend, Sara, saw him she had another opinion. She thought he was a SHE! Could it be?! One day I got the proof when "he" was rolling around in the grass acting very.....receptive. OK. Now we have an issue. This is a kitty who needs an operation and she's so wild that I contacted the Pepin Feral Friends group to get her trapped so she could be spayed and returned to me.
Maybe after going through that, the newly named, ROMA might become more tolerant.
Roma and I didn't get that chance. I found her body along the driveway. Claw marks on her back and side indicated a feathered predator had tried to take her! She would have fought like hell and might have been dropped. Who knows. All I knew was this white pile of fluff was lifeless. As I cradled her in my arms I found her tummy was round and full of tiny kittens who wouldn't get a chance at life. Sadly, I finally got my wish to hold her.

Posted by sherri at 5:35 PM No comments: