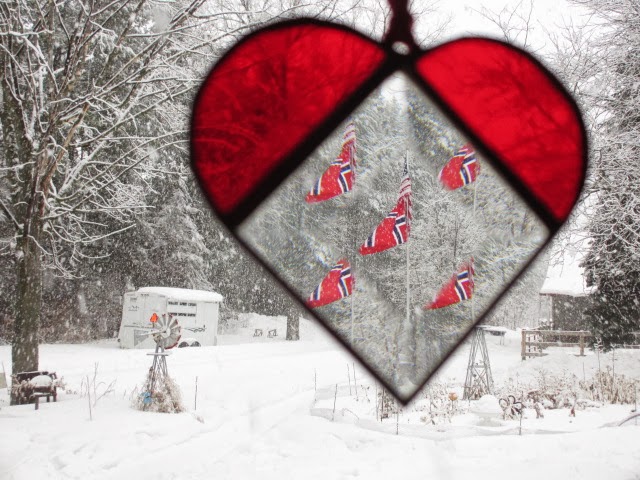 The flags were flying off the pole when we had our blizzard on Thursday. The weather reporters had us on pins and needles about how bad it would be. Our predicted 7-10" of snow turned out to be more like 5"....... probably because it RAINED so much and tamped it down. The result on Friday was a big icy mess. The truck doors were frozen shut and Don had to take hot water out to get them released. The snow just couldn't be scraped off, it was glued down! Trucks were heated from the inside out to get the ice moving. But the funniest part of the snowy ordeal was the PONY JAILBREAK!!! 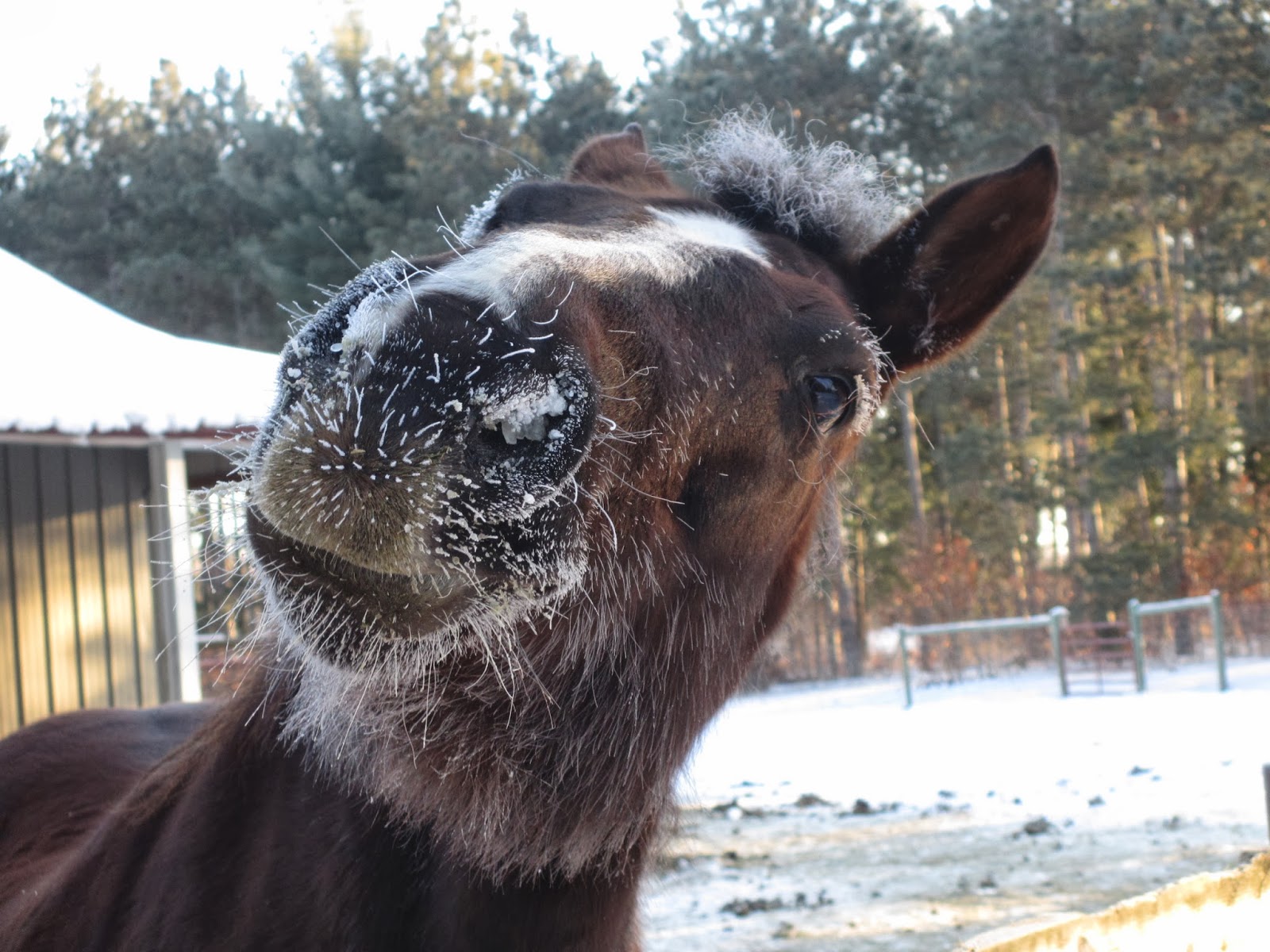 Since we have had all this cold weather, our daily routine has been to run the water at the barn every 6 hours or so. This means a late run out to the barn and the night of the storm "someone" (ok, me) must have left the gate open by the waterer when she put the hay out.

Fast forward, my usual 3 a.m. wake up, and I'm looking out the kitchen window to see black horse forms out by the barn raiding the goose feed. OMG I need to get dressed and get them in! Thinking ahead, I got a bucket of sunflower seeds from the garage and came out bearing gifts to the wayward equines. I hollered, "PONIES" and they came running to me and followed nicely back to their place on the opposite side of the fence.

Once morning came I could see they were probably out FOR HOURS! There were tracks everywhere. All the bird feeders were cleaned out, they went down the lane to the 40 ac. field, to the 3 ac. pasture and even down along the creek, (which is one place they never want to go), they went down the driveway about 3/4 of the way; places they would not like to go alone, but with their herd complete they were on a wild adventure.

Things were pretty quiet on the horse paddock Friday. They had tuckered themselves out, eaten a boatload of birdseed, had a wild escape and found out that no one was going to stop them until they stopped themselves.

Just like kids, give them enough space and freedom and they can grow.

Arts West 35 Entries (that won't be in the show)

These didn't make it into the show. Oh well, maybe next year!

"Frosty Toes" was done from a photograph I took a couple winters ago from the perspective of being at creek level. Most of my other "Catfish Corner" series were from a higher vantage point. And, yes, my toes were frosty when I was slogging through the snow to take the shot that chilly morning.

Another photo outing involved hoar frost on a massive and ancient cottonwood tree. Tradition is the only thing holding this tree up! The base is probably 5' in diameter and is HOLLOW. I could stand up in the center of this tree. It towers any other tree in the area and it's knarly! Someday it will no longer stand and I'll be glad to have this memento of a unique and beautiful tree.
Posted by sherri at 3:23 PM No comments:

I had ten enthusiastic beginning stained glass students last Wednesday. I was contacted by Kitty Latane, Pepin Community Ed director, to offer a class and after some thought I decided to go for it.

Other than a couple other teaching experiences (like 15 years ago!) I have not had the experience of being on the instructional hot seat. It was kind of nerve wracking and it didn't help matters when I ran my palm into a sharp point and was the first one to head to the bandaid box! But, rather than throwing in the bloody towel, we pressed on and completed the Danish Heart.

In all the years of having Studio Works I hired people to work for me and then taught them how to do stained glass. It's quite the novelty to be PAID to teach it this time around! This week we will be making heart ornaments and shamrocks in keeping with the season.