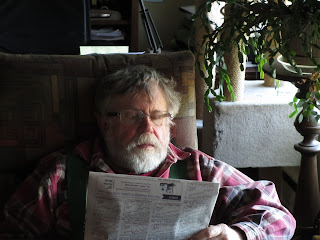 It comes around once a year for everyone! Until it doesn't. Luckily we aren't in that camp yet. After two years of near paralysis of his legs one might be a bit negative. But not Mr. Anderson! The papers must be read and an analysis of the stock market is maintained on a daily basis. The effects of Lyme have progressed through different stages over the years and the neurological effects are taking their turn. The weekly teleconference with his Lyme Group 80 with ACT (Advanced Cell Therapy) continues. Never give up! God and Gary aren't going to quit and neither will we.
Posted by sherri at 8:11 PM No comments: 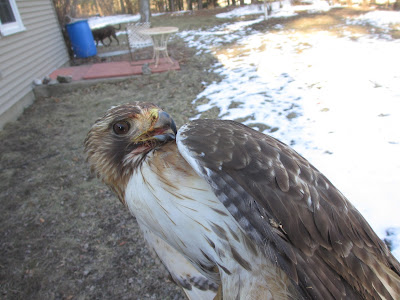 I had a big surprise when I went out to lock up the hen house last night. I found a bloody dead hen and a large taloned creature under the nesting box. I had my big leather gloves on and pulled on the legs, feeling claws trying to dig in! Was it an owl? Something had gotten into the hen house and made a kill, and now it looked like it had been attacked as well.

Turns out it was a red tail hawk and it appeared to be stunned. Maybe the roosters did their job and tried to protect the ladies? I took it to the house to show Don and then grabbed the camera and took a few shots outside. 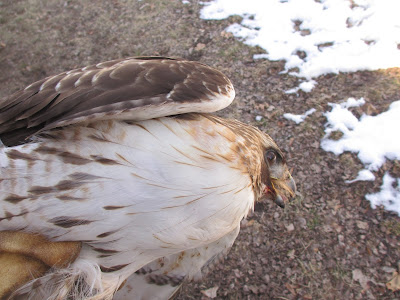 The predator was placed on the picnic table to regroup. When I came back out to take a few more photos it flew to a nearby treetop and appeared to be fine. I hauled the dead chicken down to the creek bottoms thinking it might be a tasty meal for a passerby. The carcass was still out there this morning and wouldn't you know......the red tail was in the tall tree top by the barn waiting for the next target!