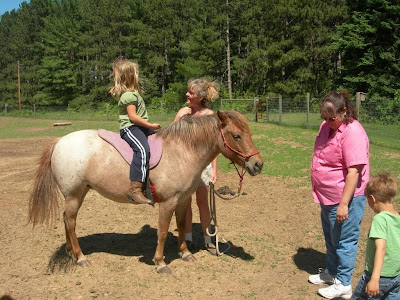 It's been a busy time since the last post. Last week I pretty much did the preparations for running the "food shack" at the Trailblazers barrel racing show which was held Sat. & Sun. I ran to Eau Claire Sam's for supplies on Thursday, made barbecues for 100 and set up shop on Friday and then spent the next two days selling hotdogs, BBQ, and lots of pop and water! This was my first "big job" and I think it made the club some money. The past two years I worked the entry booth and the announcer stand so I'm not sure if I was promoted or demoted--could be either.
Thankfully the HEAT didn't arrive until after the show. It's stifling and today is even worse than yesterday. The greenhouse is frying, I've been giving the horses cool water showers and keeping myself inside with the AC. The roving band of thunderstorms moving across Minnesota can't get here soon enough to break the spell. No tornadoes allowed, of course.
Weekend before last, the kidlets were here and we had lots of pony rides. Emmy is just such a dear little pony! I think I need to ride her myself--maybe I can improve my skills with a horse that is closer to the ground.
Sadly, we lost two of our baby goslings. One died last Thursday for no apparent reason and the rest seemed to be having problems, too. After a few hours everyone perked up and went about their goose business. On Saturday, Don caught the whole gaggle out in the greenhouse and they were into everything and had managed to open a container of Preen and were munching away on that. Gee, maybe eating plant poison would bother them?!! Several days past and yesterday I found a second one had expired out by the barn. Don found a wood tick on this one--don't know if that had anything to do with it. Our general population of sparrows, blackbirds, starlings and grackles are now nonexistent so we are speculating West Nile might be working the bird population.
Posted by sherri at 1:37 PM No comments:

Only 4 months away! I just found out our brochures are ready and soon the link will change from the Spring show to the Fall.
I have been spending more time preparing the grounds than art and that needs to change pretty soon. Hope we have a late fall so the blooms will still be going!
Posted by sherri at 2:58 PM No comments: 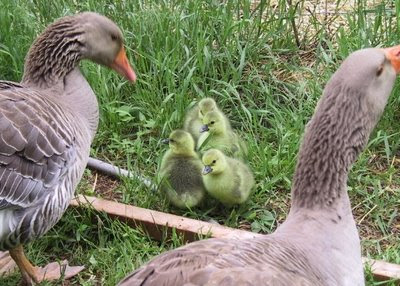 My best attempts at goose birth control have failed! The result is a hatch of 4 of the dozen eggs Mother Goose has been faithfully tending all spring. When we used to have three other "moms" they did the job of sitting while this one liked to go hang with the boys. Now that she is the only female with four males she decided she liked the solitude of nest tending.
I felt bad that I had shaken all her eggs but as it turns out she gets to try her hand at motherhood after all.
And none of them look scrambled.
Posted by sherri at 3:00 PM No comments:

Email ThisBlogThis!Share to TwitterShare to FacebookShare to Pinterest
Labels: geese

We were so thankful to get 9/10ths of an inch of rain yesterday. I didn't have to water! Today was just cloudy cool ahead of more rain coming in tonight. I got my weeding up to date before the rain so I shouldn't have any big problems once things dry out next week.
I got some good time in on my rag quilt project. Got the whole top done and the backing and batting pinned on. Now for the zillion little ties to hold the whole thing together--then finish the edging and take it to the commercial washing machine to fray those seams! I'll need a trip to Menomonie to find the string, or yarn, for the ties. I'm collecting for a deposit at Goodwill and have a tidy pile of housewares and clothes to deliver.
Posted by sherri at 4:30 PM No comments:

Email ThisBlogThis!Share to TwitterShare to FacebookShare to Pinterest
Labels: quilt

From the mouths of babes--
Our little great nephew Carter is four years old and quite the conversationalist--this was a provocative statement he made recently according to his dad-----
"Carter watched with apparent fascination while I tilled our garden yesterday.
"Someday when I am big and strong I am going to till the garden!" he pronounced.
"That's great!" I told him.  "I could use somebody to help me."
"No!" he replied.  "You will be dead when I till."
I pointed out to him that I might still be alive when he was big and strong enough to help till.
"No you won't," he responded.
Apparently he is intending to replace me rather than help me when it comes to tilling the garden.
It is good that he is feeling better after having his tonsils out.
We both laughed it off with his dad's comment about him feeling better, but the real message sank in and it was unsettling. His little mind is at work--and Don will be checking to see if he has inherited one of the family "gifts".
Posted by sherri at 5:47 PM No comments:

Email ThisBlogThis!Share to TwitterShare to FacebookShare to Pinterest
Labels: gardening 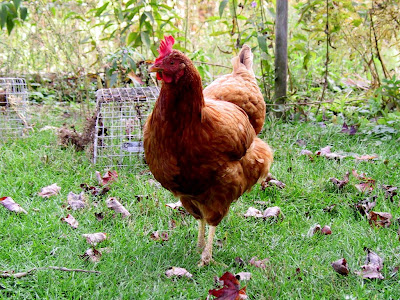 We had to say goodbye to one of our original red hens yesterday. She was one of our favorites because she always wanted to hang out around the patio or the breezeway so we would see her everyday. It was apparent her three years on earth were catching up to her and she spent a lot of time just resting with her eyes closed. Saturday the little Benson kids were here to meet their new pony, Emmy, and Paige played with Little Red, and petted her quietly. The end seemed pretty near and Sunday was a nice day to move on.
The pony rides went well--Emmy was so patient and we had many trips around the barnyard with the kids. Everyone had multiple turns until we decided "the pony" needed to rest!  Uncle Donnie was prepared to make grilled hot dogs for the finale until we were informed the kids won't eat hot dogs with grill marks! (I'm worried about their upbringing!)  So we boiled their hot dogs (this will be the last time) and we grilled ours and had a little picnic in the backyard. Grandpa Benson showed up so they got a chance to see him, too.
After a few turns at T ball, watching inch worms and playing hula hoop, their mom and dad were ready to take them home. It was only a four hour visit but seemed like more! We collapsed in the easy chairs until bedtime.
It was also the night for a graduation party being held across the road from us. We were informed earlier that there was going to be a band and that it would be going on into the night so it wasn't any surprise but what was surprising was that it would be LOUD HEAVY METAL all night. Real head banger stuff. Lots of screaming and no music involved. I was hoping for country western. I have no idea how Don slept through most of it. I finally dropped off around 2 am and then he took over watch and said it finally wound down around 4. I was pretty much shot for the next day--big party person I am--I can't even stay up late! I worked off my fogginess in the garden by transplanting zinnias. The cucumbers and melon seeds have just sprouted and things are looking good.
Posted by sherri at 8:20 AM No comments: