The Case of the Disabled Chicken 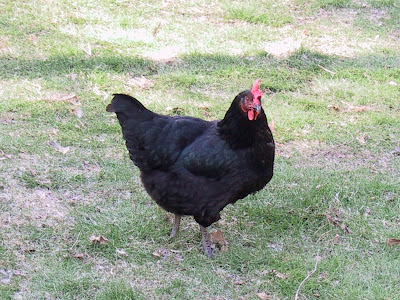 I found one of my hens on her side in the coop Monday. She was surrounded by her peers. Good grief, now what's going on? Is she disabled and being attacked? It happens in the barn that sometimes someone gets stepped on, old, or tired and ends up dying. But this one is different.

The hen wasn't looking too worse for wear and is only a year and a half old. She had bright eyes and a bright pink comb. But her legs and wings weren't working. She would try to stand up and would just plow forward on her side. Hmmmmm. Didn't look like she was going to expire anytime soon.

With over 40 hens, I take care not to name anybody. Even if I could!  But there are the roosters--easy to recognize. The different colored ones---2 Buff Orpingtons, 1 Barred Rock, and the rest end up in the blur of Black Sex Link, Gold Star, Reds, and Australorps. But now there is one special Black Sex Link hen who is getting a lot of attention.

She has a bed on a shelf in the coop with the rest of the girls and has her own food and water. Her friends come up and roost by her. Probably to help her eat her special treats! I'm happy nobody seems to be picking on her. I pick her up a few times a day and give her a chance to test her legs and have a stretch. In the years I have had hens only a few have ever let me touch them, let alone carry them around so it has been a novelty to have a physical bond with one of the lovelies.
Posted by sherri at 7:39 PM 3 comments: 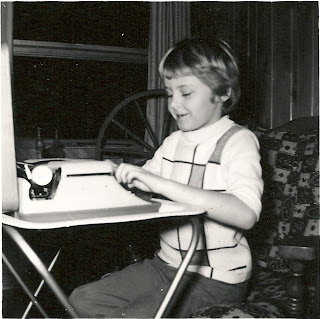 I'm trying to scan photos onto the computer and came across this one from January 1963 where I am enjoying the use of my new toy typewriter I got for Christmas. Sure wish I still had it!

I remember being a kid who had many aspirations and played at many professions. Imagination was in abundant supply and led to me trying my hand at numerous careers before age 13. Here, as the cub reporter for my newspaper, I was also in charge of making up the ads (did that later as an adult). Later I formed a club--- I think it was called The Chipmunks, but 4-H was about as clubby as I ever got.

Next was the restaurant..... where I used those ad design skills to make up the menu. My family could "order" breakfast from my menu and then I would cook it for them. I don't think I earned too many tips, but later when I really was a waitress I made up for it.

My next career was in medicine. I think I got so used to fixing up my own boo boos it only made sense that I should start charging others for my profound healing skills. I guess it was fortunate that business as a physician was slow so I got into a new gig as a shopkeeper.

Dad had built us shelves in the basement for a play store and any empty food cans or boxes were saved to stock the shelves. Hours were spent sometimes as the shopkeeper, and sometimes as the customer. That experience must have been part of the inspiration for starting Studio Works so many years later!

Of course, all that money handling in the little play store led to me opening my own bank. I wasn't too clear on the concept other than the thought that everyone in the family should let me hold their money. But, again, business was slow so I started writing to fill the spare time.

As a playwright I could spin my own stories and combine them with music! "Catch a Falling Star" was a famous song at the time, and my own romantic story was fashioned to go with that tune. A murder mystery, "Haunting at Heblock House", "Seven Days Til Dawn" and a whimsical tale of mice in the cook shack followed. Of course, as an artist, I had to illustrate those stories!

When spring would arrive, the great outdoors called. Our family's maple syrup business drew upon us all to help out as we could. Sometimes that meant just staying out of the way! The thaw would mean I could be out with the horses and by the time the syrup run was over my favorite old work horse would be available for me to ride again.

I always told my mom I had the perfect childhood. I got to play with as many dreams as I could dream up and some of them actually led to something.
Posted by sherri at 2:18 PM No comments: