The Caterpillar and The Chrysalis 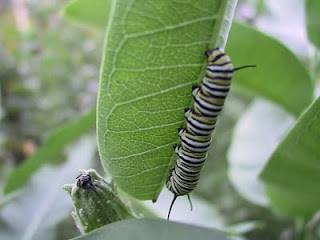 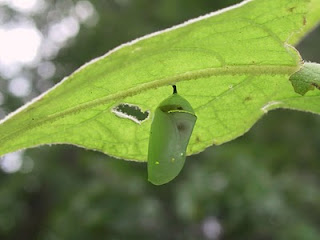 My wild side flower garden is sporting several milk weeds and upon close examination I found many Monarch caterpillars. The munchfest was in full swing a week or so ago and I haven't seen any since. However, I found one lone chrysalis and I'm keeping an eye on it.
Posted by sherri at 9:54 AM 2 comments:


Fran trailered in with her two horses and I rode Cerra up to the nearby arena yesterday for a little horsey fun. The weather was so nice-- sunny, dry and breezy. It was the perfect day to get out and ride. I think we were up there for about four hours! Got some good instruction, too. Things to play with - with the horse and things to work on - on the human.
Posted by sherri at 7:45 AM No comments: 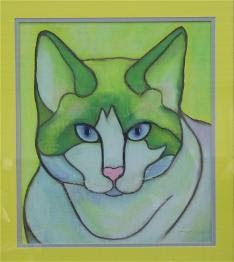 Little Jackie's life ended in the wee hours of Friday morning. He had been steadily declining this summer and even with recent daily fluids he couldn't go on. I didn't serve him well by letting him linger and for that I hope I will be forgiven. It was through my own selfishness that I just wasn't dealing with the severity of his illness. I always think I can make things better but such was not the case this time.

I'll miss his super soft "rabbit fur" and his quiet ways. He was my shy guy--who only recently came out of his secret world to join us in a way he hadn't before. I am so thankful he could share himself and be comforted in the final weeks of his life.
Posted by sherri at 8:32 PM 2 comments: 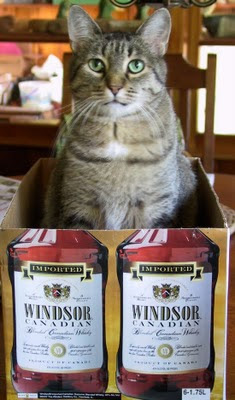 And you knew this was Don's cat because.....

This was just too cute to pass up! I brought up the canning jars, lids, rings in this box and got ready to do pickles. No sooner than I unloaded the box she piled in to claim it.

I wonder if the Windsor people need a spokes-kitty!
Posted by sherri at 8:54 PM 2 comments:

Hidden Benefits of a Heat Wave

When it's too hot out to do anything else there are two things I like to do.
1. Sit in the basement with the spiders and play computer solitaire.
2. Work in the shop.
Working in the shop has been almost as cool as the basement. There are probably half the amount of spiders and it proves to be a lot more productive. My list of projects is long.... maybe longer than the heat wave.
Posted by sherri at 4:35 PM 1 comment: 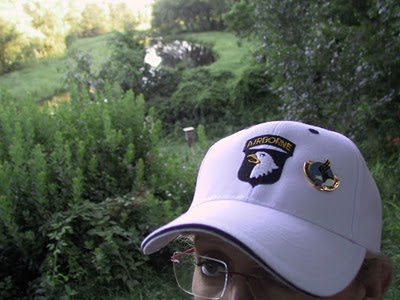 Bob sent each of us one these cool Airborne hats. Airborne to me meant being thrown off my horse but now I have a new appreciation of the true meaning! Looks like a nice Sunday-go-to-meetin' hat to me.
Posted by sherri at 8:54 PM No comments:

A Tribute to the Army 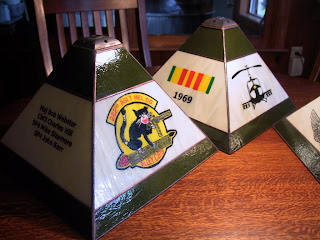 I had the honor to construct three military themed lamp shades for our retired Army friend, Bob, who lives in Georgia.

Bob was married to my dear departed friend Betty. She started as my best friend's mom in the 60's and then ended up being an integral part of the Studio Works family. We worked, laughed, cried and played together for twelve years and beyond the studio years until she died in 2005.

So, long story short, Bob called me to arrange to have these shades made. Two shades are the same. One for him and one for his crew chief and the last one was designed to be donated to his military reunion auction next year.

This project has been on the drawing board for several months as I dreamed about how to replicate the military badges and service patches in miniature and in the right colors. The result was achieved by first making black and white art work of each element. The design was then transfered to a sandblast stencil and deeply etched onto the glass panels. After the panels were washed I filled in the depressions with black first and then painted in the individual colors. The panels were then baked in the oven to set the paint into a permanent state and the rest of the regular stained glass soldering took place. 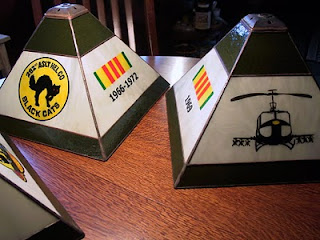 It was an interesting project as I learned to use new techniques and tools.
Posted by sherri at 6:11 PM 3 comments: