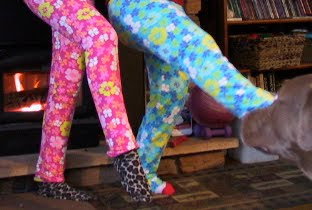 Don't laugh. THEY ARE WARM! I made my almost patented "FuzzButts" polar fleece riding pants with an outer lycra shell so we horsewomen can play with our horses and stay warm and then FEED our horses without wearing a lot of hay.

Helga was mesmerized by the performance ..... fleece. I just love pink! 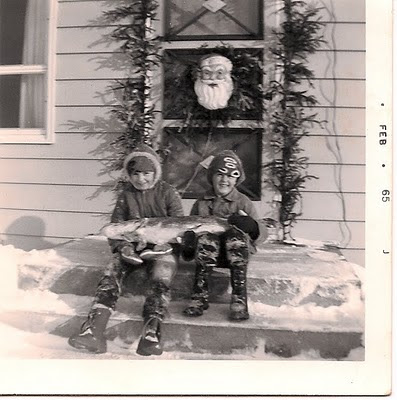 The best part about Christmas break from school was that it was Christmas, and the excitement, and presents, and the boredom that followed. We weren't used to having so many days off the routine so the next thing that had to happen was:
ICE FISHING!
Eventually mumsy would TELL daddy that she needed her sanity again and PLEASE get these kids out of the house.
Piling into the old truck, Dad would take us "up nort" to a lake far enough away that we wouldn't be tempted to come home for lunch. Preferably a big frozen lake about a half hour away, and by way of the old truck, it probably took us and hour to get up to Clam Lake. Once we got to our destination, we found plans had been made that we could occupy a friends ice house--which is the common description of a building that resembles an outhouse but where the holes are used for the object of catching fish.
We rode through the icy ruts to a little settlement WAY across the vast expanse of icy tundra and found our spot where we spent, in my mind, about four days waiting for something to bite.
It did BITE. But I digress.
Dad would dump alcohol fuel in the hole to keep the water from freezing over the holes and the fumes from the heater were nauseating. We were bored and cold but we kept at it all day long until finally we headed for home. I have never been so cold in my life as during those endless ice fishing trips.
This photo is deceiving because it looks like we were happy with our catch; however, if you look closely you will see frozen feet, lifeless hands and a couple of very frozen smiles.
What wouldn't we trade to do that again?
Posted by sherri at 6:29 PM No comments: 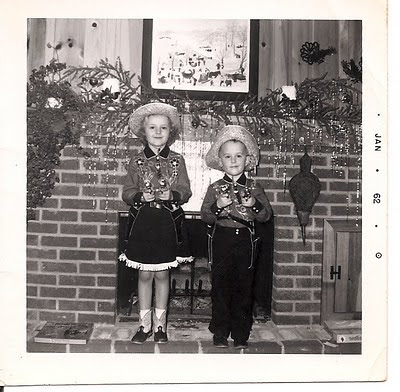 Long ago and far away a couple of kids got the ultimate little cowboy outfits and their six-shooters!
Now, class, let's point out what is inappropriate about this picture.
Talk about politically incorrect:
Guns!
Stereotypical role models!
Children near a wood burning fireplace - DANGER!
Flammable fabrics!
Lead based tinsel!
Non-recyclable plastic skirt fringe!
How did we survive it all?
Posted by sherri at 11:54 AM 1 comment: 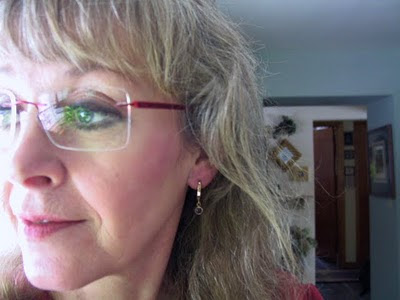 I have been fiddling around with updating my contact lenses since the middle of October. The bifocal feature of the new contacts was actually good, but the wearability wasn't. What's the point if you can't put 'em in and go all day without a hassle? I'm getting too aged to have the patience anymore to put up with annoyance. So I gave up after the 60 day trial period and opted to get a new pair of glasses instead.
I was pretty excited they showed up so fast, in a daring color, on Christmas eve. I put them on and just waited for the rave reviews from Don.
Four days later.......I'm still waiting. He has to notice, doesn't he? He knew they were coming. I have sat directly in front of him and batted my eyelashes and......nothing. I realize I could have just SAID something, and I almost did many times, but now it's just tickling my weird sense of humor. He does know, and doesn't like them, but doesn't want to mention it? Do I know? Very interesting especially since about a week ago, he asked me to "Wait. Come here. What's that thing on your neck?"
"It's called an AGE SPOT!" Thanks for picking up on that, sweets.
I suppose he will eventually read this post and say he knew all along, but, in the meantime I find it interesting that he hasn't noticed I look just like Sarah Palin.
Posted by sherri at 11:26 AM No comments:

A Christmas Day in March 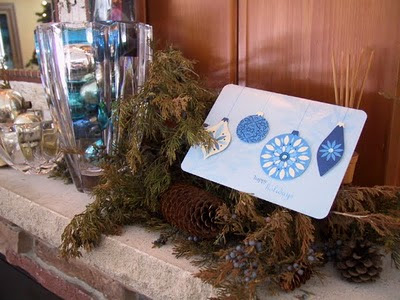 This Christmas Day is to feature the blue end of the mantle and this neat card I got from my cousin Ann and her husband Steve. They live in Memphis, and thanks to Facebook we reconnected after many years.
The last time I saw Ann was in ... 1991? After mom died, dad wanted to take a trip in the big red van to visit his sister, Ann's mom. It was a great reunion for them both and I was so happy to have been part of it. Seeing Ann and Karen, all grown up and married was great fun, too. It doesn't really seem like almost 20 years ago.
It was quite an adventure--I drove the Great River Road all the way to New Orleans with a guy who was getting started on the path to alzheimers. We spent a couple days there poking around, it was in March and well after Mardi Gras so it was pretty calm. The Great River Road was interesting--it went right through the industrial areas of most cities, didn't follow the river exactly, but we sure saw lots of country. Following the route out on the flats of some Illinois farm trail--now that was memorable. As we traveled farther south we met up with spring! The flowering azaleas and magnolia blossoms were beautiful and such a treat after having left snow and ice up in Wisconsin. Bud got to see his old home on Union Street in Memphis and Bourbon Street once we got to NO.
Today, a rainy Christmas, looks just like March.
Posted by sherri at 9:27 AM No comments: 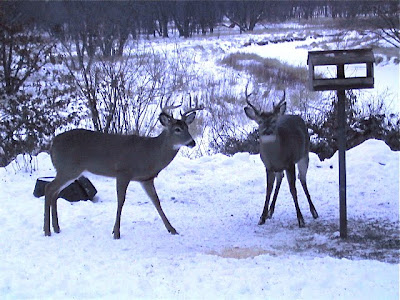 It has been a treat to see this duo most evenings at the bird feeder. These are probably two of the little fellas who were here last year because they seem to know right where to go to get the best goodies.
Of course, boys being boys, sometimes there is a little tussle about taking turns! 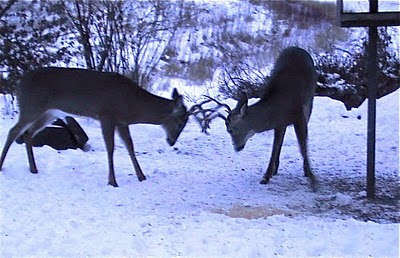 I'm so happy they made it through deer season.
Posted by sherri at 4:56 PM 1 comment: 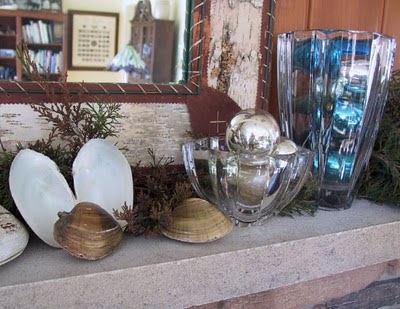 Christmas preparations are continuing at Catfish Corner. I made more cookies this week--sunbuckles, rosettes, cream wafers and then tackled the swedish meatballs. Next on the list are the fun quick things---chocolate covered pretzels and peanut brittle and the tom & jerry batter!
It's good to take a little break and read the christmas cards and letters that have been arriving and sampling a few of those baked yummies.
Friends children and grandchildren are growing up so fast! It's so great to be remembered with the gift of cards and photos. Thanks so much!
Everyone has clam shells as Christmas decorations, don't they?
Posted by sherri at 10:18 AM No comments: 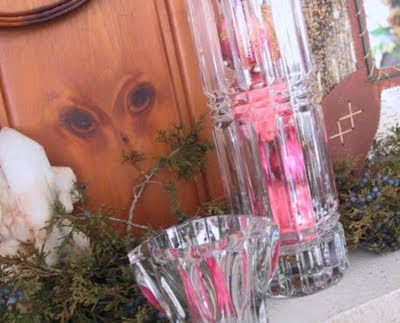 Don cut me some cedar branches that were full of blue berries and I thought they would look nice on our mantle. I have loads of vintage glass ornaments so they went into my glass vessels since my teensy pencil tree can only hold so many.
I got a chance to move things around and appreciate this cute little owl that is prominent in the knotty pine paneling.
I have a feeling this feature was by design as a builder would certainly have appreciated the unique beauty.
We have several other little faces on our walls and, and even though wood paneling is "out" and painted walls are "in", I couldn't bear to hide them under paint.
Posted by sherri at 8:31 AM No comments:

Good Day for a Blizzard 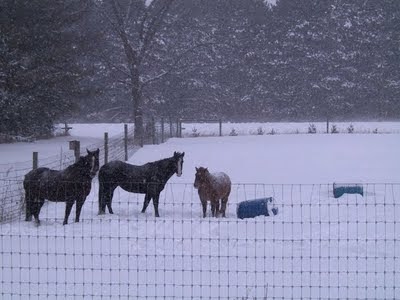 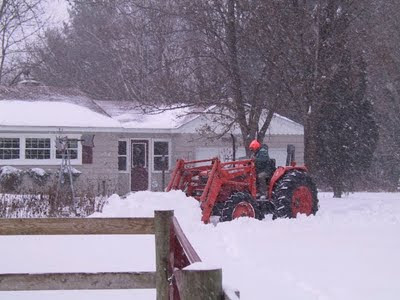 The wind really howled last night and we woke up to a good 12" of snow. After we got the birds and animals fed, we made ourselves the lumberjack breakfast before we went out to move snow.
Don spent several hours on the tractor and decided to save some for later. The next two days are supposed to be super cold so maybe over the weekend I can put the horses in the round pen and then he can clear out a lounging area.
After they had their breakfast the ponies decided to get a little snow on their coats. No idea why they like standing out there in the wind when they have a cozy box stall to stay in.
Posted by sherri at 1:59 PM No comments:

Email ThisBlogThis!Share to TwitterShare to FacebookShare to Pinterest
Labels: winter 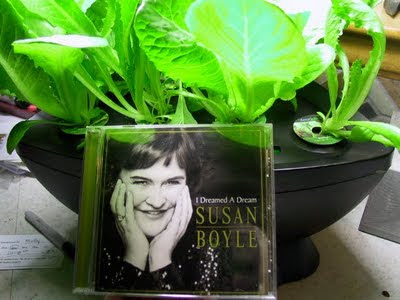 You will notice the romaine greens are growing nicely in the AeroGarden.
I have Susan Boyle's CD in the forefront because it is WONDERFUL! I have followed her story from her breathtaking performance that launched her career.
The first two songs--"Wild Horses" and "I Dreamed A Dream" are so breathtaking that the first night I had her recording I was inspired to go out in the moonlight to dance with my horses. They responded by thinking I was a crazy woman. Which I am. But, I love the feeling of being moved by music.
Dreaming dreams is a worthwhile pursuit no matter what your age is. Just don't be afraid to look silly in the process. The horses will love it.
Posted by sherri at 7:41 PM No comments: 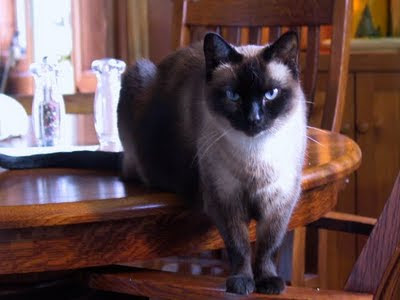 She knows it's the rule. NO CATS ON THE TABLE. However comma no one in our family seems to know this.
She was being so deliberately naughty--not totally on the table, but partly on the chair. And she knows this and posed quite perfectly while I photographed her in her own state of defiance to the establishment.
What a gorgeous creature.
If I were that cute, I could sit on the table, too.
Posted by sherri at 7:11 PM No comments: