To Lie In Rest 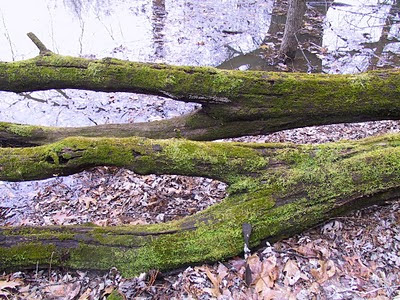 The woods decay, the woods decay and fall,
The vapours weep their burthen to the ground,
Man comes and tills the field and lies beneath,
And after many summer dies the swan.
Me only cruel immortality
Consumes: I wither slowly in thine arms,
Here at the quiet limit of the world.
-  Lord Alfred Tennyson, 1809-1892
Posted by sherri at 12:49 PM No comments: 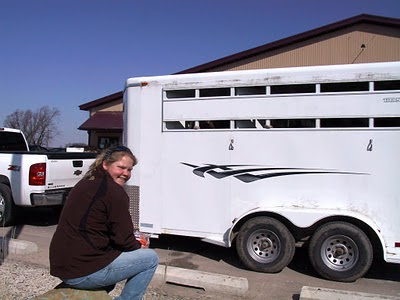 I drove Fran to meet her mentor, Two Star Parelli instructor, Farrah Green, at Albert Lea on Tuesday. I had precious cargo: her two horses, Princess and Crest as the trailer passengers. Fran drove her car and led the way across the Minnesota prairie. She kept ahead of me like a jack rabbit being chased by hounds, while I poked along at my boring 55 mph! I haven't been on such a long trailer ride since our trip to Madison back in.....07? when she was on the Parelli Savvy Team.

We switched the horses to Farrah's trailer in the Travel America parking lot. Like well-mannered Parelli trained horses they went up the ramp of the big fancy trailer! And off they went to  Heartland Ventures where Fran will be helping Farrah for the next several weeks. Hope she blogs about it so we can follow her adventures.

It has been several years since Don and I traveled to SoDak so I was surprised to see the large number of windmills that have sprung up. 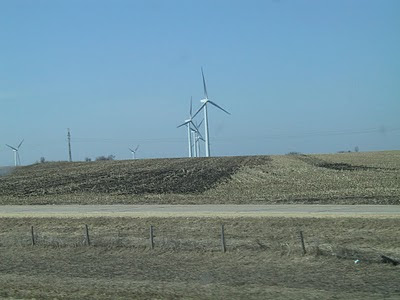 I got off a couple shots but they look puny compared to the actual size. They are HUGE!
Posted by sherri at 1:33 PM No comments:

Arrival of the Flood 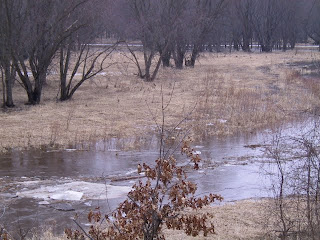 The rapid meltdown brought the flood waters through Catfish Corner on Saturday. Within a couple hours the water had risen and carried with it an assortment of debris and massive ice shelves. Don said there was an ice dam on the Chippewa and it was backing everything up through our backwaters channel.

Our warm temps of 55-60 over the weekend, quickly melted the ice and it seems to be clear sailing now.

I went out on my Saturday excursion walking deer trails with cameras in tow. 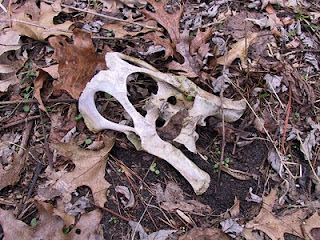 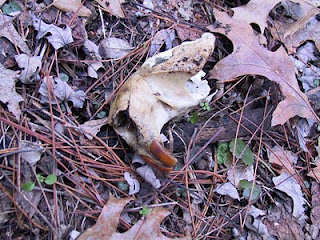 I walked for a couple of hours and on the last few steps home, found a OLD shed antler by our wood pile. It was at least a year old and all chewed up by squirrels. I left it there for them to finish it off. Squirrels need minerals, too. 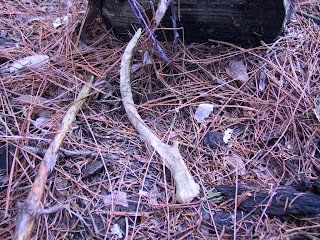 As you can see the shed antler looks amazingly like the pine stick next to it.
Today I went out with Don to the area where he is marking trees for his logging project. I had buckets with me to collect old cans and bottles that have been out there littering the landscape for years. I kept and eye open for sheds, too, but only came away with three cat litter pails full of old tin and bottles.
However, later I found I had a woodtick. Reminds me of a Brad Paisley song.
Posted by sherri at 8:27 PM No comments: 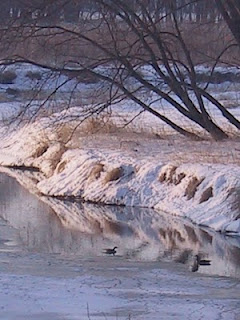 The snow is rapidly disappearing--and it should! It hasn't been below freezing all week. I snapped this shot just before the big warm up. It's been really active at Catfish Corner these days. In the past week I have been a chimney sweep, a "shed" hunter, creator of new works in the shop, cleaner outter of the hoop house, and horse groom for shaggy ponies. All this while Don is getting us ready for the dreaded tax appointment.
Next week I will be trailering Fran's two horses to Albert Lea, Minnesota, we will get the taxes done in Winona, and I will travel up to Luck to deliver the "Trinity" window to Grace Lutheran and visit my friends in Luck!
So what's "shed" hunting? Our evening visitors--the bucks--showed up last Friday without their antlers!  I was tracking the deer trails in search of those "shed" antlers. It was brilliant sunshine last Saturday when I decided to go "in search of". There was still plenty of snow but it was soft and hard to walk in. Just like walking on a snow "beach". 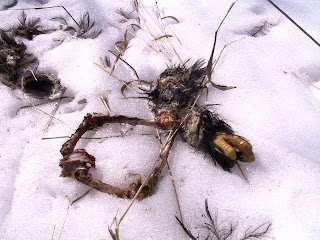 What I found, however, was not anything I would have ever expected to find--namely, the remains of an eagle. I first found a trail of feathers and later came across the partial skeleton. It could have been anything until I saw the big yellow talons. It was a fresh kill but there wasn't a shed of flesh left. Nor was there a head, body, or much else to identify it.
I called our friend and DNR Wildlife Manager, Kris Johansen, at his Alma, Wisconsin, office Monday morning and told him about the find. He said it is common for eagles to kill each other this time of year as they are very protective about their territorial rights. We have an eagle nest several hundred yards from where I found the carcass. We have been witness to lots of fighting going on so that was probably what happened. The other possibility was that it was sick or injured and if it was on the ground it would have been a target for all kinds of predators.
It is illegal for non-native Americans to possess any parts of an eagle. Kris said there is a place in Colorado which serves as a repository for deceased eagles; however, given the condition of this one, he suggested that Mother Nature be in charge of the proper disposal of the remains. Our water has been rising daily so I expect what little is left will be swept down the slough for fish food.
Posted by sherri at 4:52 PM No comments: 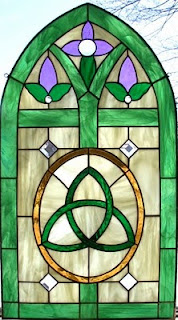 The finished product for Grace Lutheran at West Sweden. This is the last of eight windows that I have worked on over the years. Their vision was to have the large white windows in the sanctuary decorated with large hanging stained glass windows. This window measures 20"x 36".

Sandy Lundquist was instrumental in the initial overall design and took on the coordination of these projects. We are also friends who went to Frederic High School together, rode horses, performed in musical groups and, while I don't get to see her often, our friendship even carried us through business matters. Thanks, Sandy!
Posted by sherri at 2:11 PM 1 comment: