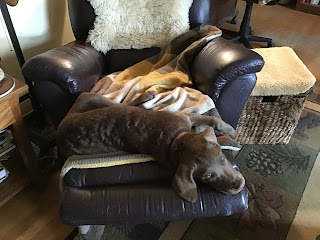 Phoebe, almost 4 months and nearly 35#. Yes. I have lost my comfy chair!

That's OK, as I didn't have an opportunity to use it on Saturday. A rare day off from glass work has to be used wisely. I'm stoked up about getting so much done! Very cold weather is ahead next week so it's the last chance to work outside and not freeze.

There were hoses to drain, pumpkins to pick, and tractor work. The big box stall got cleaned and the hen house was shoveled out, fresh hay in the nesting boxes and the dreaded rat runs were filled with water, gravel and wadded up chicken wire. Phoebe found a dead rat and while gRoSs.... it was reassuring that the underground rat poison was placed in the right spot.

The young chickens are huge now and are just beginning to lay eggs. Unfortunately, they aren't keen on laying in the hen room so it was an Easter egg hunt to find their hidey spots. One of them held the motherlode of 10 eggs! They will probably like their clean nests now.

The hay man came to replace some bales while I pulled cobwebs and swept out the barn, loaded up the recycling and broke down boxes for the trip to the dump.....er, Recycling Center.

The horses enjoyed the walk to their green pasture and it was a productive day, but, it didn't all get done so maybe I'll have another "day off" tomorrow.

Senior (Old People) Yoga
This has been a "do for me" project that is part of the University of Wisconsin-Madison study on the effects of yoga on the aging population. The idea is to prevent falls and that seems like a good idea for all. Our group of 15 has been at this twice a week for six weeks which puts us half way through the study.

They gave us all yoga mats, duffle bags, water bottles and a Garmin fitness tracker which has been really fun to use. I heard from the first class that we are getting a new Garmin at the end of the sessions. 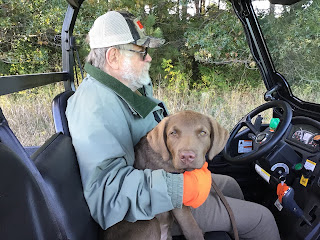 Posted by sherri at 7:22 AM No comments: